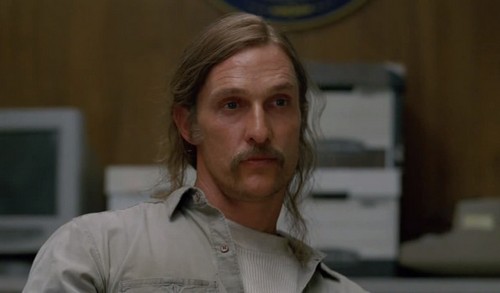 Matthew McConaughey‘s star has never been hotter, especially after winning the Oscar for Dallas Buyer’s Club and heating up Emmy talks with his phenomenal performance in HBO’s True Detective. Say what you will about the man, but there’s no denying that he’s turned his career around in a spectacular fashion. From Rom-Com king to award-winning actor in prestige blockbusters – you’d be hard pressed to think of another actor who pulled that off. However, new tabloid reports are now suggesting that Matthew is upset that Brad Pitt is being considered to replace him for the second season of True Detective, despite the fact that he was never signed on to do it in the first place.

Matthew and co-star Woody Harrelson only signed on for True Detective because they were only going to do it for one season, and because it gave them a chance to work with acclaimed director Cary Fukunaga. They always knew it was a one-and-done deal, and they’ve both been very vocal about that. Plus, they’re movie stars that are busy with their film careers, and they’re not going to set aside three or four years to do a television series, no matter how appealing that series may seem. So all these rumors seem like a petty attempt to start a non-existent feud between Matthew and Brad.

Regardless, let’s take a look what these supposed ‘sources’ said. According to Showbiz Spy’s unnamed sources, “Matt can’t stand Brad, and has always envied his career and superstar status. The last thing Matt would want is for Brad to waltz in and steal his thunder after he and Woody Harrelson worked so hard to make the show a hit.”

The reports also suggest that since Brad has such a great relationship with HBO, it’s only a matter of sorting out his other commitments before he signs the dotted line to star in True Detective’s second season.

I have an extremely difficult time imagining Brad Pitt starring on a television show, no matter how prestigious that show is. Despite their recent awards acclaim, Brad and Matthew are still in different positions in Hollywood. Matthew is still an actor before he is anything else, whereas Brad has now become an industry power player and producer. He seems to be focusing more on making films and staying behind-the-scenes recently, and I don’t think he’ll take a job that will take him away from his family for six months.