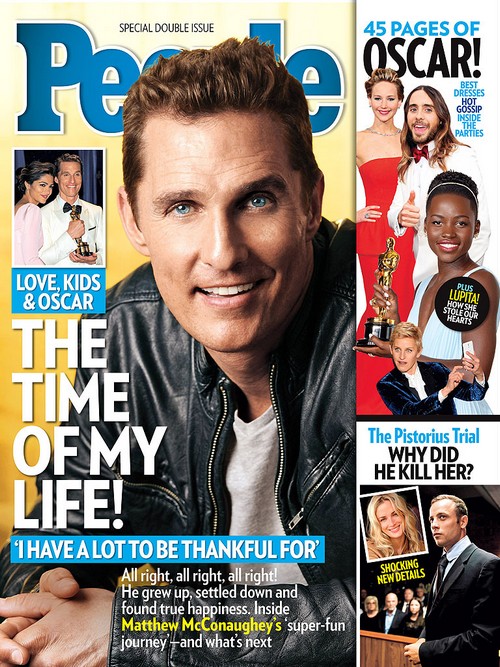 People Magazine’s latest cover issue focuses on the Oscar Awards, and the night’s big winner, Matthew McConaughey. Matthew won Best Actor in a Leading Role for his performance in Dallas Buyer’s Club, and while his speech was definitely one of the more… interesting of the night, he looked genuinely grateful to be up there.

In a new interview with People Magazine, Matthew reiterates those sentiments, revealing that he has a lot to be thankful for right now, including his wife, his family and children, and of course, his Oscar. He explains, “I try to give a lot to my life and the people in it. and I know they sure give back. I have a lot to be thankful for. My life outside my career is extremely enriching. So I am letting that feed my work, and letting my work feed my life.”

It’s been more than two decades since the actor broke out in 1993’s Dazed and Confused, but a large part of his career has been dominated by mediocre romantic comedies. However, the last two years have focused on a career ‘McConaissance’, and Matthew’s had the best comeback story of Hollywood. He’s always been talented, but he finally started being selective about his projects, and lo and behold: True Detective, Magic Mike, Mud, and Dallas Buyer’s Club emerged. And don’t forget, the actor also has Chris Nolan‘s Interstellar releasing at the end of the year, so it’s possible he ends up back at the Dolby theater next year.

Finally, an in-depth look into the Reeva Steenkamp murder trial sheds new light on Oscar Pistorius and his motives for murdering Reeva.