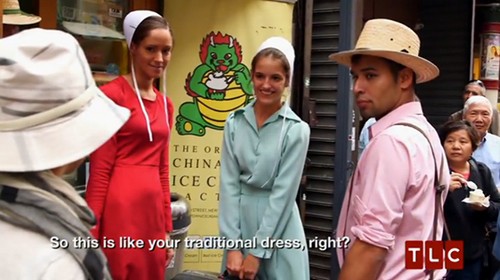 Tonight on TLC Breaking Amish returns with an all new Thursday October 2, season 3 episode 3 called, “Bright Lights, Big Sinners.” On tonight’s episode after spending their first night in a youth hostel in Brooklyn, the group sets out to explore the city ending up a the episcenter of New York: Time Square.

On the last episode, drama ensues as the group prepares to leave the Amish world for New York City. With the reality of leaving home and everything they’ve ever known setting in, some of them learned the past they were trying to leave behind had coming along for the ride. Did you watch the last episode? We recapped it all right here for you.

On tonight’s episode after spending their first night in a youth hostel in Brooklyn, the group sets out to explore the city ending up a the episcenter of New York: Time Square. But, the spectacle of Time Square doesn’t prepare them for the drama that is about to unfold.

Brooklyn is intimidating to a couple of sheltered Amish kids. They’ve never seen any place like it and honestly the borough scares the life out of them. So the guys set about making the girls feel better by taking their mind off of their troubles (such as living in a hostile).

Matt and Bates bought a couple cases of beers. And, no surprises here, drunk people are incline to talk. Subsequently after a few drinks, the ice was broken so to speak and all of them soon started to bond once they got relaxed. However Vonda didn’t want to join in. She was nervous about drinking in a bedroom with two guys she barely knew and decided to stay sober. Which was smart of her but then she didn’t want to participate when they all started to talk about their lives back home. She just stayed quiet in a corner almost like she wish they would forget she was there.

Although Barbie caught on to Vonda was doing and she started to question why the other girl was keeping herself apart from the rest of them. Was Vonda nervous or simply stuck-up?

During the “getting to know you” part of their stay, Matt had told everyone he was single. He had dismissed his wife and her pregnancy. Later, he told the producers he didn’t know why he had did that but he knew from then that he liked Miriam. It was pretty obvious that he liked her and he began flirting with her from the very beginning.

Everyone else has noticed the flirting and not everyone is comfortable with it!

When personal relationships weren’t getting in the way, the guys decided to explore the city. They were told to use the subway and just getting onto a train alone proved to be difficult. They didn’t know how to get a metro card and the whole experience of being on a crowded and smelly train was a bit lackluster.

But the city itself was everything they had imagine it would be. It was bright and one of a kind. And no one regretted seeing it. Vonda had also enjoyed herself. Seeing the city had opened her up and she was ready to talk to the other guys.

Then when they all went to a bar that’s where things went south. They got to drinking and partying. And Matt had gotten so drunk he admitted to having a wife in front of Bates. Bates hadn’t said anything at the time but he was confused about why Matt had lied to him.

Anyways they kept drinking and the group left the bar pretty much using each other as crutches. Which didn’t help in the case of Matt and Miriam. Leaning all over each led to some slight groping. And by time they came back to the hostile – Bates had found himself without a room. Matt had kicked him out so he could have the boys’ room all to himself and Miriam.

So in the morning, when Barbie woke up and saw Bates sleeping in the girls’ room – she wanted an explanation. And Bates was so hung-over he didn’t have the brain space to form a lie. He merely told her Miriam and Matt had hooked up the night before. Then he mentioned Matt’s marriage and that set Barbie off.

Though Barbie thinks Miriam shouldn’t have slept with a guy she just met – she’s angrier at Matt for lying about being married. Because he didn’t just tell Miriam that lie. He told all of them he was single.

Miriam was furious after Barbie finally filled her in on the truth. She confronted Matt right after that and he had nothing to say to her at first. He actually took a break to cry to himself about betraying his marriage vows and only apologized once his pity party was over. But she was over him by then.

Miriam could now see what a user he is and so does everyone else!