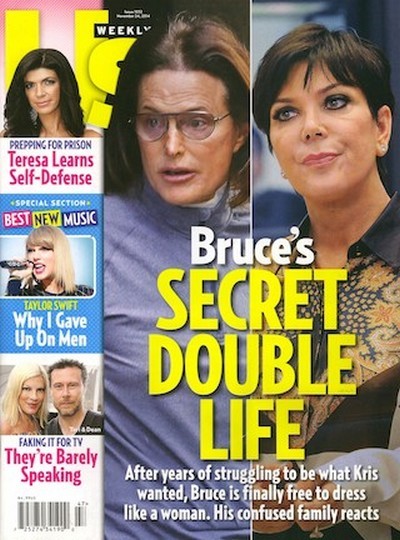 Bruce Jenner’s goal is to live as a woman, become a woman and dress like one according to a tabloid report. Kris Jenner claims Bruce is a transgender cross-dressing transvestite who both dresses like a woman and is changing into one this rather odd piece which seems designed to humiliate Bruce while defending Kris. Well, the Kardashian VS. Jenner battle lines have officially been drawn. Have you ever noticed that Us Weekly always takes it easy on the Kar-TRASH-ians? No matter what story is in the news about Kris Jenner, Kim Kardashian and their degenerate family, Us always try to spin it positively, and in exchange they get all of the family’s big exclusives like first baby pictures and wedding announcements. And, that is exactly why the November 24th cover of Us Weekly has us all scratching our heads with its leading story, “Bruce’s Secret Double Life.”

“His goal is to live as a woman and look as much like one, he has been struggling for a long time with his feelings about being a woman inside,” claims a source for the tabloid.

Now, keep in mind we suspect Kris Jenner herself gave the go ahead on this week’s cover story which is a takedown piece on Bruce Jenner. The cover shows the most feminine photo of Bruce Jenner they could get their hands on and claims, “After years of struggling to be what Kris wanted, Bruce is finally free to dress like a woman. His confused family reacts.” The magazine goes on to explain that Kylie and Kendall are totally supportive of whatever their father does, Kris and the Kardashian sisters on the other hand are “trying to be respectful.”

Multiple sources have reported a growing feud between the Jenners and Kardashians, which boils down to the fact that Kris and her daughters from her previous marriage to Robert Kardashian are not happy about the scandal and what it is doing to their brand. And, Kylie and Kendall are furious with their mother and older half-sisters for not supporting Bruce. It looks like the messy Kardashian-Jenner divorce… just got messier!

So, are you as shocked as we are that Kris Jenner apparently gave her approval to Us Weekly to run this story and participated in a piece designed to embarrass Bruce? Are you Team Jenner or Team Kardashian? We are Team Bruce and support his right to be who he wants to be. No matter what Bruce does he will always be a far superior person to Kris Jenner. Kendall and Kylie seem to have their Dad’s back on this cross-dressing issue, are you surprised? Let us know what you think in the comments below!