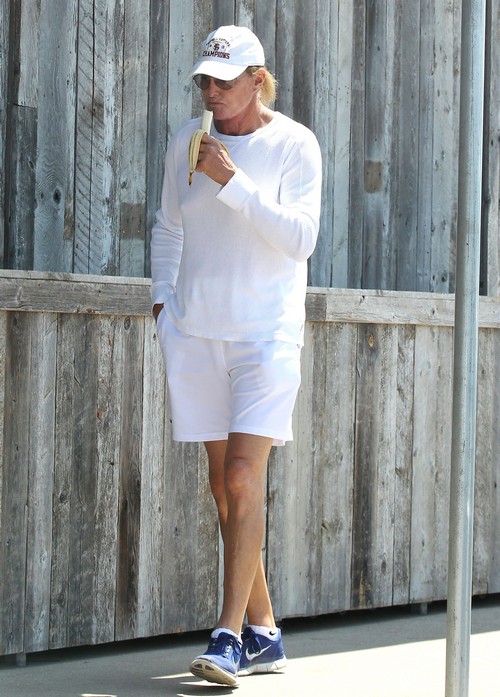 Bruce Jenner’s sex change and transgender activity is still in the news as the Keeping Up with the Kardashians dad has shaved down his Adam’s apple, grown his hair out, unofficially changed his name, feminized his appearance, and started wearing Spanx. And now, he’s started shaving his legs. The sex change process takes a long time, but this is usually what comes at the end, no? Is Bruce Jenner undergoing transgender treatments or does he just have special interests in his appearance?

The Daily Mail has the pictures of a clean-legged Bruce out at Starbucks near his home in Malibu, but their source also adds, “Bruce was acting feminine as he waited inside the coffee shop. What was most eye-catching were his legs, they looked especially shiny and smooth for a man.”

Are we just weeks away from seeing Brigitte Jenner? If you look at Bruce’s legs from a few years ago, the difference is night and day. He’s an Olympic gold medalist, for goodness sake. Not only were his legs insanely muscular back in the day, but also very, very hairy. And now? Not so much.

At this point, he’s gotten feminine features, long hair, a practically non-existent Adam’s apple, slim and hair-less legs, and made-up nails. Really, the only thing left is to slap on some makeup, and we can probably introduce Brigitte without further ado. Either that, or Bruce is just punking us all in an elaborate, multi-year prank and filming it all for posterity, a la Joaquin Phoenix.

Of course, Bruce’s family will continue to deny the sex change rumors, no matter how much evidence is thrown in their face. And Bruce has been fairly subtle about all these changes, and he’s stayed relatively low-key, venturing around his home in Malibu but rarely stepping out in LA. I still think the main reason he’s quitting Keeping Up With the Kardashians was because he wanted the freedom to look and act however he wanted, and his contract wouldn’t allow that. Well, who’s having the last  laugh now, huh?