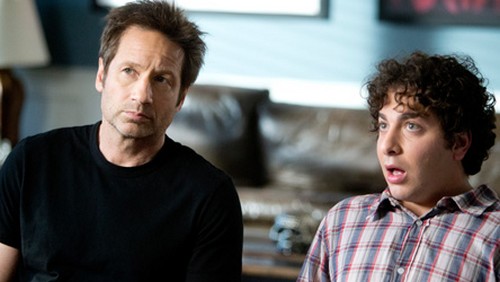 Tonight on Showtime Season 7 of CALIFORNICATION airs with its third episode called, “Like Father Like Son.”  On this evening’s episode, Hank gets his first assignment. Levon tries to bond with Rath’s assistant; Charlie tries to make up with Marcy and Karen might give up on Hank.

On last week’s episode Hank got frustrated with his “Santa Monica Cop” coworkers on his first day in the show’s writer’s room, and he got a surprise when he visited Levon’s apartment. Meanwhile, Charlie met Rath’s new assistant; and Karen got an unexpected surprise.  Did you watch last week’s episode?  We did and we have a full and detailed recap, right here for you

On tonight’s episode Hank gets his first episode assignment, much to the dismay of coworkers Terry and Hugh. Meanwhile, Levon tries to bond with Rath’s assistant; Charlie attempts to patch things up with Marcy; and Karen considers giving up on Hank.

Hank gets his first episode assignment, much to the dismay of coworkers Terry and Hugh. Meanwhile, Levon tries to bond with Rath’s assistant; Charlie attempts to patch things up with Marcy; and Karen considers giving up on Hank.

Tonight’s episode begins with Karen upset with Hank over the fact that she is no longer the first ‘baby mama.’ While Hank thinks it is a good thing that he impregnated Levon’s mom before he was even with Karen, she cannot get over the fact that she was not the first to have his baby. She reminds him of his duty to tell his daughter about the new brother she never knew about. Hank seems unfazed by her fury or about his upcoming talk with Becca. Hank takes off to pick up Levon.

Levon is not even close to being ready when Hank picks him up to take him to the studio with him as he now has a job as an assistant. He tells him to hurry up and flirts with Julia a little bit before leaving. But not before he finds out that Levon used to occasionally expose himself to girls!

At the writer’s table, everyone is brainstorming the next story line. Terry, one of Hank’s least favorite co-workers, belittles him again and knocks his skills. Hank is slow to bring any ideas to the table. As he begins to share a potential story line, Rath is liking it. However, all hell breaks loose when Levon walks in with food for him that was not what he wanted. He goes nuts on Levon and makes him feel terrible in front of everyone. Later, Hank goes to check on him and gives him a pep talk. It is then that Levon shares he wants to sleep with Rath’s assistant. Hank knows this is next to impossible, but still keeps it positive.

Rath and Hank are auditioning young women when Rath is needed outside. Hank is left alone with a sexy young woman who tells him she is willing to do anything for the role. When Hank tries to stop her advances, she takes matters into her own hands…and Hank’s hand into her own hands and begins to pleasure herself with the use of Hank’s digits. Terry walks in on this and promptly tries to tell Rath. At first, he puts her off and the actress finishes up her audition the right way. Later, Rath pull Hank in the office and asks if what he was told by Terry was true. He said yes and gave an explanation of what happened. Rath is upset and tells him that he is now obligated to hire her because if he doesn’t she’ll come back saying that Hank did something to her against her will. They are interrupted by Rath’s assistant who comes in looking very upset. Rath asks what is wrong. Moments later, Hank, Levon, and Rath are in the office discussing what horrible thing Levon did. Levon explained that while Rath’s lovely assistant was showing him so off-colored videos on YouTube, she told him she wanted to see some of his faves. He obliged but ended up showing some really dirty porn and began rubbing her back while she watched. Now Rath is really heated. They are both told to get out by Rath who is really upset.

Hank tells Levon what he did was disrespectful. Levon comes back throwing Hank’s audition problem in his face. They two argue some more before Levin takes off. Later at the writer’s table, the group is interrupted when Levon comes in with Julia. She makes him apologize to everyone, starting with Rath’s assistant. She then chastises Rath for being mean to her son. After she goes off on Hank, Rath tries some smooth moves (which Hank spots easily, by the way) and tells Julia she is made for acting. He takes her out of the room to talk.

Charlie is still sulking over his manhood issues. He and Hank are talking when Marcy texts Charlie asking him to come home and take care of his wife. Knowing he won’t succeed, he walks out slowly, dreading the inevitable. After he leaves, Hank calls Karen telling her how much she appreciates her. He lays it on thick, but Karen sees through it and tells him he just wants his ego stroked. She tells him he needs to learn how to deal with his problems. After Karen reminds him that he needs to talk to Becca, she tells him how she may take the news and it doesn’t look good. He asks her how she is doing but she tells him he has other things to worry about now. He ends the call asking her not to give up on him.

Meet us here next week to read all about our fave scandal-ridden guy, Hank.