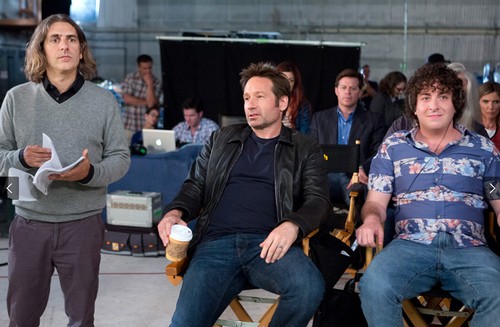 Tonight on Showtime Season 7 of CALIFORNICATION airs with its eighth episode called, “30 Minutes or Less.” On this evening’s episode, Hank encounters problems with Hashtag Black on his episode of “Santa Monica Cop,” and the Director instructs him to get things back on track. Meanwhile, Julia becomes a distraction; Levon gets a big opportunity; and news of Stu’s offer leads to a fight.

On last week’s episode Rath demanded a rewrite of Hank’s “Santa Monica Cop” script. Meanwhile, Julia’s new boss gave her some career advice, but Levon and Hank have other ideas; and Charlie and Marcy considered Stu’s offer, until Atticus’ butler offered an alternative solution to their money problems.  Did you watch last week’s episode?  If you missed it we have you covered with a full and detailed recap, right here for you.

On tonight’s episode Hank encounters problems with Hashtag Black on his episode of ‘Santa Monica Cop.’ The Director, however, makes him get things back on track. Julia proves to be a distraction. Levon gets a big opportunity. And news of Stu’s offer leads to fisticuffs.

Tonight’s episode begins with Hashtag causing a scene when he uses derogatory terms towards his female costars and want to change the script so that he ends up making out with his costar and having two women fight over him. Hank tries to play diplomat while Rath is in his office, but gets talked in to going to see Rath about making the changes.

While outside, Amy tries tempting Hank to come to her trailer and shares that she’d much rather be kissing him. Just as they reach her trailer, Hank keeps walking as he sees Rath and Rath warns him to stay away from the actresses. Rath tells Hank that he is producing the episode so he can make the decision about Hashtags’s proposed changes. As Hank walks back to the set, he is stopped by Julia who pulls him into her trailer for a quickie…that ends REALLY quick because Levon comes knocking on the door. He comes in nervous about this upcoming audition and asks Hank to come with him.

Levon is so nervous that he ends up knocking the camera over, sweating through his shirt, forgetting his lines, and finally, having some serious gas. Hank has to run after the audition is interrupted to let him know Hashtag is looking for him and on his way up the stairs. He runs into the office of yet another admirer. She is glad to allow him to hide in her office, and begins to get comfy next to him as she suggests they have an affair.

Charlie comes to see hank and tells him about Stu’s offer. Hank cannot believe Charlie is considering the offer. Just as they are talking about how the whole thing has been a major turn-on for Charlie and Marcy, Stu walks up and is as obnoxious as ever, telling Charlie his offer has a deadline. Charlie ends up punching him below the belt as Stu screams in pain. Hashtag comes up just then and Hank cannot escape him. He talks to Hank about writing in a kissing scene with Amy. Hank finds a way to hold him off for a few more episodes. Just then Hashtag’s friends come up and he explains to Hank that he had them rewrite the script to make it funnier.

Hashtag leaves with his friends while terry comes up and tells Hank Amy wants to see him in her trailer. She tries to seduce him, and just as she is trying to persuade Hank to give in, Hashtag walks in finding them in a compromising position. Hashtag is upset, yells at Hank and runs out. Later, on the set, Rath comes down to check in and finds that Hank is high, and that Hashtag is running the scene the way he wants it. Rath is not happy and tells Hashtag off. Hasthtag tries to push the blame on Hank’s inability to leave the actresses alone. When Rath explains that it was weeks ago when hank got in trouble with an actress and he doesn’t want to rehash it, Hashtag explains that the incident he is referring to happened only five minutes ago. He shares how he walked in on Amy and Hank. Julia is upset and blurts out that they just had sex, Levon gets involved and starts asking about their relationship status, and Rath is upset with Hank because he knew that he was interested in Julia and told him he could pursue her.

After everyone calms down, Hank walks outside and sees Karen is calling him. As he knows he is running late for their dinner meeting to discuss how to tell Rebecca about Levon, he answers the phone explaining he is on his way. It is Marcy on the line, however, delivering news that Karen has been in a bad car accident. Leaving viewers begging for five more minutes to hopefully find out what happened, we are left to wait until next week as this is the point where tonight’s episode ends. Be sure to visit us right here next week CDLers, and we’ll have all the details on Karen’s accident and how Hank is reacting to the news.