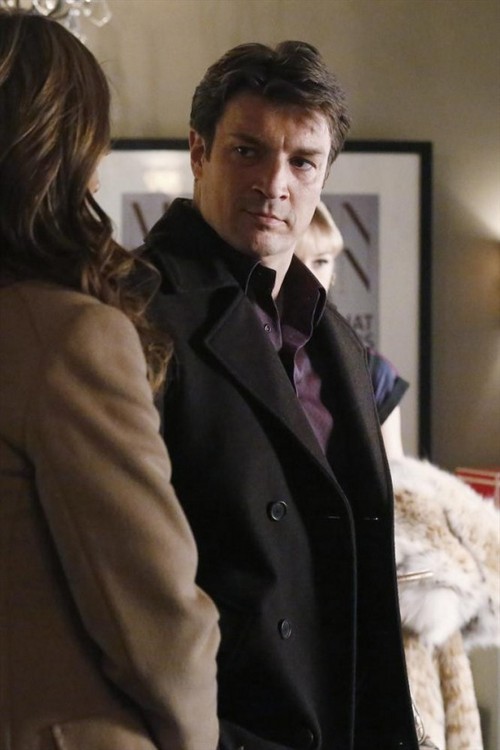 Tonight on ABC their hit crime drama CASTLE returns with a new episode called “Dressed To Kill.”  On tonight’s show a young women’s murder ends Castle & Beckett into the cutthroat world of high-end fashion.  Frances Fisher Guest Stars.  Did you watch the last week’s season 6 episode 11? We did and if you want to get caught up, we have a full and detailed recap, right here for you.

On last week’s episode when a rising young pop star was found dead in an alley, Castle and Beckett delved into the victim’s out-of-control hard-partying lifestyle, but as they dug deeper, a shocking revelation threatened to rock their investigation.  Alexandra Chando (“The Lying Game,” “As the World Turns”) guest starred in the episode.  Guest Cast: Alexandra Chando as Mandy Sutton, Lola Glaudini as Marilyn Sutton, Myko Olivier as Pi.

On tonight’s show when the assistant to Modern Fashion Magazine’s dictatorial editor Matilda King (guest star Frances Fisher) is found murdered, Castle and Beckett are thrust into the glitzy, ruthless world of high fashion in their search for the killer. Meanwhile Beckett’s history in the modelling world gets her access to a very special wedding surprise.

A woman runs for a gun under her sink and escapes through the window; there is a corpse inside the room found when the police break in. The woman gets down from the fire escape and a officer on a bike starts chasing her; she runs into a dentist office and locks the door. She pulls out a gun and tells everyone to not move. Beckett wakes up Castle and she mentions that she can’t believe she was fired by the FBI; she has no idea what to do for work now.

Alexis comes in with the phone and Castle is called to a crime scene with Beckett to find a girl named Emma who stabbed her boyfriend to death; Emma has hostages and she wants to only speak to Castle about negotiations. Castle calls Emma and she gives him questions on his books to make sure it’s actually him; Castle gets them all right. Emma tells Castle to walk in and wants to speak face to face; Castle tells her to let go the woman with her 9 year old child and she agrees.

Castle believes he can get her to surrender, he is told that his rescue word is cheese burgers; Beckett tells him to do nothing stupid and wants him to live. Castle walks up to the dentist office and goes inside, Emma is shocked that it is him and lets the mother and her child out. A guy talks and Emma goes crazy on him, Castle tells her to calm down; he questions what she wants. Emma says she just wants him, she said that she did not kill her boyfriend and wants Castle to prove her being innocent.

Castle says to the police he is fine and needs to talk to Emma still; Emma tells Castle she got home late last night because she bought a dress for her birthday dinner with her boyfriend. Emma was sure it might have been a proposal tonight, Emma says she got home and when she woke up in the morning she found him on the floor dead; there was a lot of blood and she has no idea what happened to him or why he was at her apartment. She started to panic and ran away; ending up at the dentist office. Castle asks her to run him through it again.

Beckett goes into the crime scene to check the corpse, she is told by Ryan that Emma texted her boyfriend saying she was drunk and wanted to see her; Ryan found that Emma could have had a psychotic break without taking her meds and being drunk. Castle says to look at her phone, Emma sees her text and has no idea that she did that; Castle says they found her scotch bottle empty and it wasn’t just a glass. One of the hostages says that drinking too much can make you lose your memories, Emma doesn’t believe it. Emma says that she doesn’t text the way that was texted to her boyfriend; Emma gives Castle the phone to go dust for prints. Emma then holds the hostages at gun point.

Castle comes out and runs off to the others and mentions that Emma might be telling the truth for being framed as the murderer.

Castle tells to Beckett and other officers that he believes that Emma could be telling the truth, someone could have knocked her out or drugged her scotch; Castle reads some files on Emma’s boyfriend that he was a really good man. Beckett says that something was going down with Emma’s boyfriend and his car; the driver spent two hours drinking coffee in his car alone. Sully says that the boyfriends car had a bunch of burglar tools. Castle comes back to the dentist office and brought doughnuts; Castle tells her that her boyfriend might have met back with some old friends who were burglars. Castle is called and Beckett tells him that Emma has been playing him the whole time; she has done this several times. She killed her foster brother at 16, Beckett tells Castle that he has to leave right now; Emma guesses what Beckett told Castle.

Emma says she is not murderer and he wasn’t supposed to learn about the kid she killed; Emma still says she is innocent. Castle says that Emma has to tell him everything to trust her, Emma says when she was 16 and there were twin orphans that lived there; they bullied her for weeks. The parents didn’t care, but one day the twins were nice to her and she thought they really changed; they went to the basement and drank a little. One of the boys made a move on her and she accidentally stabber him; Emma says it can’t be the other twin who is alive since he is in prison for 8 years. Castle is told that Angelo her boyfriend stole something from her old orphanage. A man jumps Emma and they fight with the gun; while fighting the gun goes off and shoots Castle. Beckett and the team runs in and Castle gets up announcing he knows who the killer is.

Castle mentions that maybe Emma’s birth parents didn’t want Emma finding out who they were hence killing Angelo who was going to announce to Emma who her parents were; Beckett says if it was a set up how would they know about Emma’s history. Ryan says that Emma’s sealed records were open three days ago, Beckett comes in and the guy they find to ask about how he showed a file to someone he wans’t supposed to; time to time he slipped information to a lawyer. Ryan brings in the lawyer and he denies everything and won’t mention his clients name, Ryan says they struck out; Esposito found the files to Emma’s birth parents. Emma’s mother is dead but her father is a big shot.

They ordered Emma’s father to come in and the captain says that their careers are on the line; Castle and Beckett offer to call him in since they don’t have one. They bring in Emma’s father and ask if he has been in touch with his daughter whatsoever, they tell him about her boyfriend going and stealing her files where she was adopted; Beckett asks Mr. Stokes if he knew about Angelo stealing the files. Ryan has the lawyer in custody and tells him that they have security footage showing him at the apartment with Angelo’s keys getting into his room searching for two hours; Ryan says that he without a doubt killed Angelo. Castle goes to see Emma and tells her that it is over and that the real murderer confessed, Stokes walks in and comes to say hi to Emma and tell her happy birthday; the two hug.

Beckett is given her job back after Stokes talked to the commissioner about her being let go; even Castle is back as a consultant and their relationship is approved in the work place.