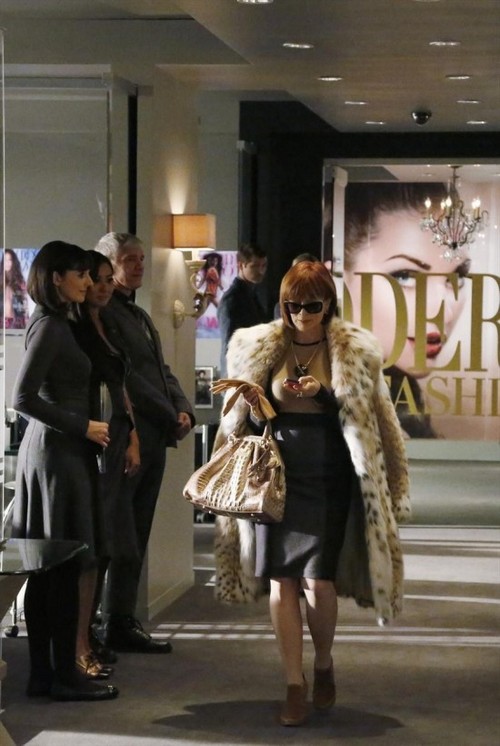 Tonight on ABC their hit crime drama CASTLE returns with the new episode it was suppose to show last week called “Dressed To Kill.”  On tonight’s show a young women’s murder ends Castle & Beckett into the cutthroat world of high-end fashion.  Frances Fisher Guest Stars.  Did you watch the last week’s season 6 episode 13? We did and if you want to get caught up, we have a full and detailed recap, right here for you.

On last week’s episode when a rising young pop star was found dead in an alley, Castle and Beckett delved into the victim’s out-of-control hard-partying lifestyle, but as they dug deeper, a shocking revelation threatened to rock their investigation.  Alexandra Chando (“The Lying Game,” “As the World Turns”) guest starred in the episode.  Guest Cast: Alexandra Chando as Mandy Sutton, Lola Glaudini as Marilyn Sutton, Myko Olivier as Pi.

On tonight’s show when the assistant to Modern Fashion Magazine’s dictatorial editor Matilda King (guest star Frances Fisher) is found murdered, Castle and Beckett are thrust into the glitzy, ruthless world of high fashion in their search for the killer. Meanwhile Beckett’s history in the modelling world gets her access to a very special wedding surprise.

Tonight’s episode is going to be great and you won’t want to miss it. So be sure to tune in for our live coverage of ABC’s Castle tonight at 10 PM EST! While you wait for our recap, hit the comments and let us know what your think of Castle season 6, so far?

RECAP: Martha is talking to Beckett about some wedding magazines to give her some ideas on what to plan on in the future, Castle and Beckett both pick out a venue for their wedding; but they are then called in to a crime scene. A girl was found in the dumpster dead and works for Modern Fashion as an editor in chief; there were blue hairs found on the girls body and they were animal furs. Beckett asks Esposito to look for any eye witnesses; Esposito goes to talk to her roommate. The roommate says she left early in the morning and never saw her since she left; they ask if the victim had a relationship and the roommate mentioned there was no one.

The roommate mentions that the victim has been very stressed lately and Esposito give her his card asking her to call him if she finds anything else; Castle and Beckett go to the magazines headquarter. The receptionist tells them that they have to wait because Matilda who owns the magazine is busy; Matilda notices Beckett since she modeled for the magazine a long time ago.

Castle and Beckett enter Matilda’s office; she mentions firing the victim after she made a mistake. Beckett says that her former assistant is dead and they want to know if she had any problems; Matilda mentions that an incident where another assistant Grace had a fight with the victim over getting fired.

The photographer got some pictures of the two fighting in the background of his photo shoot; they notice that Grace had a blue scarf similar to the hairs they found at the scene of the crime.

Esposito notices that the victim had a bug in her house; Beckett mentions an exterminator once went into her house and apparently his company doesn’t exist. A witness says that the man was dressed nicely and had a club tie; Castle figures out the club and have pinned it on a man named Marcus Conway. They see Marcus and figured out how they tried to hire the victim to find dirt on Modern Fashion; but gave up after she declined. Beckett asks why he was at the place she died; he mentions she invited him to meet her to give him some dirt that would end Modern Fashion.

Marcus hands Beckett the phone with a voice mail from the victim asking to meet him and he mentions he waited for 2 hours but she never showed; Beckett mentions a bug in the victims apartment and they assure them they did none of that. Espositio brings them a file that Modern Fashion put the bug in her room; they find a man who they identified to be the exterminator who wired her house; he says that he bugged the place and was told by Matilda to bug her place.

Beckett goes into Matilda’s office as she is freaking out on the phone; Matilda is hung up on and throws a glass at the door. Beckett tells Matilda if she is worried to be replaced; Beckett asks why she ordered to have all her workers with their houses bugged with their permission that was in the agreement in their employment contracts. Matilda says that she had no idea what Ella the victim was planning to take to the competition but would love to know, Beckett says she needs all of Matilda’s recordings.

Esposito says he thinks he found something on the recordings, Ella makes a call saying she is being targeted to a friend; he says that she wanted him to take a look to Matilda’s calendar to see if they were tampered with; the guy says many of them were and Ella believes she was being set up. The guy found an IP address; Beckett asks for it. Matilda mentions that the calendar mistakes were to make her look bad; Matilda asks Beckett to do a favor for her. Castle goes with Martha to check out the venue and learn that it’s only free in a year; the woman mentions they had a freeing in their schedule to allow them used it this year. Beckett is wearing the dress Matilda wanted her to model in; Matilda believes she looks amazing.

Beckett gets a phone call and picks it up, Castle mentions how amazing the venue opened and found a couples opening for the Spring. Beckett looks very unsure about the whole thing and doesn’t answer Castle about getting it.

Espostio says that a designers studio is said that a guy named Yumi might be behind it; Beckett and castle go to talk to him. Yumi mentioned that Ella came to ask for a job but mentioned there was no way he could help, Castle mentions how they traced and IP to his studio; Yumi mentions he’s a about to be famous with Matilda. Castle says that Yumi’s winning design isn’t his, it’s exactly the same as Ella’s designs; Castle then mentions that he used her designs after his failed. Ryan came in and is told that Yumi was at the office; Ryan then notices that Yumi made several calls to Modern Fashion.

Matilda brings in a bunch of people into her office and talks to Julian; she asks what his opinion on Yumi’s designs. Yumi told Matilda that it was Julian’s idea for her to have her calendars changed and knew Yumi was stealing Ella’s designs. Beckett walks in and comes to arrest Julian; he is going to plead not guilty.