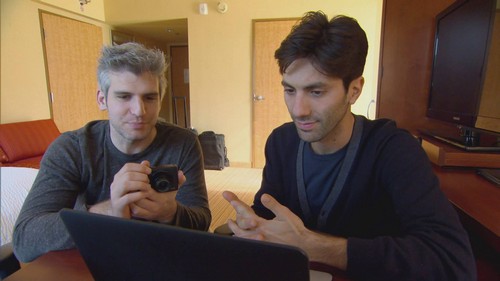 Tonight on MTV their series about online dating, the show called CATFISH returns with a third episode titled “Lucille & Kidd Cole”.  On tonight’s episode, a woman searches for answers about a mysterious music producer.

On the last episode called Antoinette & Albert; Albert really likes Antoinette. He told his friends about her and he tld Antoinette that she was beautiful. She’s so beautiful that she doesn’t necessarily have to post pictures of herself in a dress all the time and she still would be beautiful. As for Antoinette, she was simply pleased to feel the same connection with him that she had through their text messages as she does in person.  DId you watch last week’s episode?  If you missed it we have you covered with a full and detailed recap, right here for your enjoyment.

On tonight’s episode Lucille is unhappy when she searches for answers after never been paid when she took a job with music producer Kidd Cole, who one day just disappeared. She’s asking Nev and Max’s help to finally get the answers she needs. Will Kidd Cole be the person she was expecting to see?

Tonight’s episode of Catfish features Lucille, she reaches out to Max and Niev for assistance with a guy she met online that is currently scamming her for thousands of dollars. Lucille thought she was in contact with rapped Kidd Cole on Twitter, and has been speaking to him since 2012 online. Kidd’s manager Miguel promised her a job at his record label, and had her book appearances for Kidd Cole in Washington D.C. However, after she booked all of the appearances, security, cars, hotels, etc, all of the bills came to her and totaled over $20,000. Miguel stopped taking her calls, and she is stuck footing the bill.

Max and Niev head back to their hotel to investigate. They call a woman that works at MTV to see how legitimate Kidd Cole is. She says she has never heard of Kidd Cole, she has friends at Kidd’s alleged record company and plans to call them and see if he is really an artist. They search for Miguel’s phone number and realize that he and Miguel are the same person. They also find a Facebook group that is full of members that have been scammed by Kidd Cole.

Max and Niev head back to Lucille’s house to fill her in on what they have learned. They explain that anyone can put an artist’s page on MTV’s website, it doesn’t mean that he is legit. His music on Sound Cloud isn’t actually his song it’s by a rapper named Little Martin. And, Miguel and Kidd Cole are the same person, he doesn’t have a manager. They also show Lucille the Facebook page started by people that have been scammed by him. Lucille agrees to head to DC with Max and Niev to get to the bottom of it.

Lucille, Max, and Niev meet with Loretta a limo driver that was scammed by Kidd Cole for over $8,000. She knows where he lives, and is filing charges against him for fraud. Niev calls Kidd Cole to see if he will set up a meeting with him to meet Lucille face to face, he doesn’t let on to him that they know he is a scam artist.

The next day Max, Niev, and Lucille head out to meet up with the infamous Kidd Cole face to face. They head down to a dock in DC and Kidd Cole is standing there waiting for them. He tells them that he has been busy in the studio working with Wale and Wutang Clan. Max and Niev reveal to him that they checked out his music and it is all fake. Kidd Cole ignores them and keeps looking at his phone, so Niev takes it out of his hand and throws it in the water. The producers apologize profusely and tell Kidd they will replace his phone. Kidd says that “it’s a wrap for today,” and he doesn’t want to film anymore. He says that he has a session tomorrow in the studio and they can come with him so they can see that he is legit.

The next day Lucille, Max, and Niev head to Kidd’s studio to see him at work. They arrive at the address he gave them and they find a note on the door that says “come in we are down in the studio.” The house seems nice and legit and they head down to the studio. Niev says he wants to “lay down a track.” He goes in to the booth, and it becomes clear that Kidd and his friend have no idea how to operate the equipment. His friend gets flustered and runs upstairs and the camera man follows him. He confesses to the camera man that he has no idea how to use the studio, and he doesn’t even live in the house. Kidd called him the day before and told him they needed a studio to shoot a TV show in.

They sit down with Kidd Cole and explain to him that they know he is lying, and he is nothing but a scam artist. Kidd begins arguing that he “isn’t trying to scam people” and he just wanted to “get connected to the right people.” He confesses that when he was 16 he had to stay in a shelter, and grew up in foster care, and no one ever took his music serious. So, he was just trying to prove people wrong. He tells Max and Niev he knows he is going down the wrong path, and he is going to correct himself.

Two months later Max and Niev check in with Lucille and learn that she is going to college to become a criminal justice major, and she just saw online that Kidd is still scamming people and is now claiming that he co-produced Beyonce’s “Drunk In Love.”