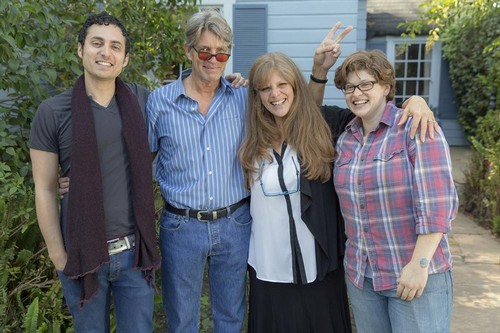 On last week’s episode of ABC Celebrity Wife Swap two Hollywood dynasties came together for the first time when the partners of actor Daniel Baldwin and music legend Jermaine Jackson swapped lives for one week.  Did you watch the episode?  We did and we recapped it right here for you.

On tonight’s episode, Robin Leach is best known as the host of the long-running television series “Lifestyles of the Rich & Famous.” Robin keeps a lavish lifestyle in Las Vegas, NV complete with expensive cars, elegant dinners, fine wines and champagne, and his “Lifelong Heartstring,” Joan Severance. Robin and Joan enjoy spending almost every evening out on “The Strip.” Meanwhile, in Los Angeles, CA, Eric Roberts and his wife Eliza live a quiet life, complete with a squirrel sanctuary in the backyard. Eliza, an actress in her own right, is not only Eric’s partner in life, but partner in work as Eric’s manager and radio show co-host. Eliza is constantly working and even built a bicycle workstation where she multi-tasks the majority of the day.

But it’s not all “champagne wishes and caviar dreams” when Eliza arrives at Robin’s house and shares that she does not drink alcohol nor enjoy Robin’s love of fancy dinners and late nights on the town.

When it’s time for rules change, these women have a few surprises for their new families with Joan bringing more work/life balance into the Roberts’ home and Eliza giving Robin a lesson in the art of simplicity.

We will be covering tonight’s Celebrity Wife Swap, Robin Leach and Eric Roberts episode with all the details. You don’t want to miss this episode, you never know what craziness is going to break out! Don’t forget to come back to this spot at 8PM for our coverage of the episode.

On tonight’s episode of Celebrity Wife Swap features TV host Robin Leach and his partner Joan and Eric Roberts and his wife Eliza. The wives pack up and fly across the country to move into each other’s houses with their husbands.

Eliza enters Joan’s house and snoops around. She is overwhelmed by the size of the house and thinks it is more like a resort.

Joan snoops around Eliza’s house and can’t believe how small and “funky it is.” She is confused as to why there are so many desks and no dining room. She can’t believe they have cats crawling all over everything.

The wives sit down and read each other’s manuals to see what they are in store for, and then they get to meet their new husbands for the week. Eric shows Joan to their guest house, which is a tree house. Joan doesn’t hate it, but she thinks it is a little small. Robin meets Eliza and wants to have a glass of champagne with her. Eliza explains that she doesn’t drink and Robin is shocked, he thinks you “can’t trust anyone who doesn’t drink,” and it is “radically wrong.”

Robin and Eliza prepare for a night out on the town, and Robin is annoyed that Eliza won’t drink champagne with him. Meanwhile Joan tries to put Eric’s schedule together for him, she isn’t even halfway done with it and Eric announces she has to drive him to his audition. Joan thinks that Eric and Eliza spend way too much time together and Eric needs to learn to do things for himself.

In Las Vegas Eliza is exhausted after a night out on the town in Vegas with Robin, but she has to wake up early to cook him breakfast, which is quite a challenge since she has no idea how to cook. Joan is having a rough morning as well, Eric informs her it is her responsibility to feed the wild squirrels, and she is petrified of them.

Robin hires a beauty team to come in and give Eliza a makeover before they go out on the Vegas strip for the second night in the row. Eliza is a homebody and isn’t thrilled to have to get decked out in a glitzy gown to go out to dinner-especially since she is a vegetarian and Robin wants to go to a steak-house.

T’s the morning of the rules change- and the celebrity wives now get to run the households their way. Joan decides to present new rules during Eric’s weekly live radio show. Joan thinks that they should transform Eric’s office into a dining room so that they can have a proper dinner and she wants them to go out and for once have absolutely no “work talk.”

Eliza thinks that Robin is living too lavishly and they are going to ditch their fancy clothes, Bentley, and celebrity chefs. Eliza thinks they need to have more fun in the house, so she is going to have some children come over and Robin is going to have to cook for them. She also wants Robin to help her save all of the insects that are floating in the pool. Robin thinks that she is a hippy and she should have stayed at Woodstock.

Eliza has bizarre set up in her office, an exercise bike attached to her desk and computer so that she can exercise while she works. Joan thinks that it is unhealthy, and Robin needs to learn to separate her work from exercise and other aspects of her life-so she wants the bike removed from the office. Eric is hesitant but finally agrees and drags that bike out of the house. Meanwhile at Robin’s house Eliza is forcing him to pedal on an exercise bike while he works on his computer during the day.

It is the final night of the swap and Joan has dragged Eric out of the house for a night out on the town to watch his son perform. Meanwhile at Robin’s house Eliza has invited some wild kids over to fill his house with laughter and joy, after they leave she forces him to clean up the mess they made himself with a broom, instead of hiring someone else to clean it.

The wife swap is officially over and Joan and Eliza get to meet each other and their husbands. Eric thinks it was unacceptable that Joan refused to feed the squirrels. She explains that she thinks it is dangerous. Robin thinks that it is unhealthy how much time Eric and Eliza spend together and think that they need to be less co-dependent. Joan thinks that it is strange that Eliza exercises while she works, and Eliza reveals that now Robin pedals while he works too, Joan is mortified. Robin advises Eric to take his wife Eliza out on the town once in a while.

Over all Eliza and Joan enjoyed their times with each other’s families. And, they plan to keep in touch after the show is filmed. Eliza and Eric took some of their advice to heart and go out together once in a while.