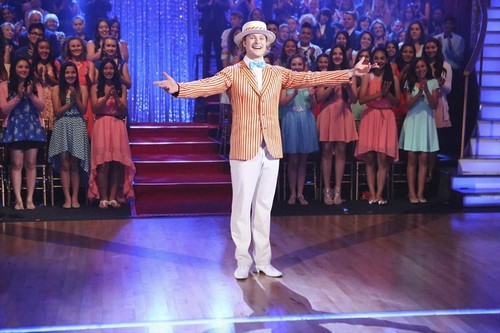 Ricky Martin kicked-off the night with a show-stopping opening performance of his 2014 World Cup song “Vida” accompanied by the Pro Dancers.

On last episode Charlie performed a Cha Cha Cha dance and Bruno loved it saying, “That was my favorite dance, the fact is that you captured it.  You never lost the Cha Cha Cha.  The style was spot on and there all the way through.  This track is hell to dance to you made it look easy.”   They scored Charlie 36/40.

Charlie White and professional dancer Sharna Burgess: dancing a Paso Doble.  Charlie has been getting ready for his dance tonight and is excited about his team dance.

Judges comments: Len: “I don’t know about Latin Week but it you had to take your shirt off.  Too get a 10 you had to do something special, and that was not it.”  Bruno: “You put so much into it you lost a bit of steadiness.”  Carrie Ann: “What you need to do to get a 10 you need to put and end on your move.”  Ricky: “I see what they are saying but I was living the moment and I was flying with you guys.  I was blown away.  You need to stay in the show.  The passion that you had was amazing.  it was beautiful.”

[Don’t forget to bookmark this page and come back later.  We will be uploading the video once it is released]