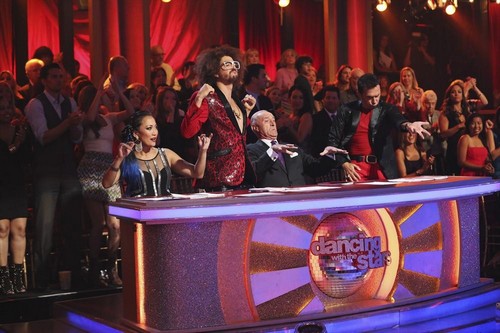 Dancing With The Stars is back tonight with a whole new episode of glitz and glitter. On tonight’s episode another elimination occurs after the seventh week of performances. Latin dances are featured, and Ricky Martin performs and serves as a guest judge.

On last week’s episode the show kicked-off with a spectacular opening performance followed by each couple dancing to some of the greatest party anthems of all-time. Additionally, LMFAO frontman Redfoo guest judged alongside Len Goodman, Bruno Tonioli and Carrie Ann Inaba.  Drew Carey and Cheryl Burke were sent home.  Did you watch last week’s episode if you missed it we have a full and detailed recap, right here for you.

On tonight’s episode Ricky Martin kicks-off the night with a show-stopping opening performance of his 2014 World Cup song “Vida” accompanied by the Pro Dancers. He will then join Len Goodman, Bruno Tonioli and Carrie Ann Inaba as a guest judge for the evening. Each couple will perform an individual dance to a song with a Latin theme. Additionally, the competition will include two Latin inspired team dances. At the end of the night, one couple will face elimination.

Tonight’s show opens up with a great performance by Ricky Martin.  Ricky sang his 2014 World Cup song “Vida” accompanied by the Pro Dancers.

Ricky says as a judge he is looking for passion and engagement.

Judges comments: Len: “You lit my fire out there.  I loved that mix.  It was sharp and rhythmic.  First out, first class”  Bruno: “Amy my darling no question, you are hot.  Seriously, I found it very very good, it was sensuous, you never lost the elegance.”  Carrie Ann: “You are wonder women, you are proven you athleticism.  I have to be strict but your foot came off the ground.  I want this to be fair and if you win, there is a high chance because you are incredible.”  Ricky: “I go by what my heart is feeling, I was trying to make my notes but I could not take my eyes off you.  I felt  a lot of things.”

Judges comments:  Bruno: “Can I ask you a couple of questions, what are you doing tomorrow.  They have blown my spark plugs.  That was filthy and dirty and I love it.”  Carrie Ann: “Where is that drink at – Pita and James your chemistry is sick.  You worked that samba.”  Ricky: “You guys are taking it to the next level.  It was surprise after surprise it was the gift that keeps on giving.”  Len: “Pita I think you are a bit overdressed.  You kept the motor running.  Your foot work was not perfect, you gave it your all, full of energy and I loved it.”

Judges comments: Carrie Ann: “I feel for you having a broken rib makes that dance difficult.  I think you did it well – but the injury stifeled the movement.”  Ricky: “I am going ask on behalf of the nation, how you feel.  It is incredible.  Mad respect because someone else would have said I am gone.  You too have amazing chemistry.”  Len: “There were two sections of salsa.  It was a little bit careful.  You went wrong once.  It was good.” Bruno: “You went for ghetto salsa from the hood.  The fact is you cannot gain that kind of feel if you cannot use your body to the full extent.  But I am sure you are going to be back next week.

Judges comments: Ricky: “Was it that NeNe or NiNi?  I think before even the music was started you were getting ready.  You were floating on the stage, in character.”  Len: “As always you got right in character and you sold it.  The technical could have been better.”  Bruno: “You definitely got the part, you have to work on those hooks they have to be sharper.”  Carrie Ann: “The opening was a ten but there was not much speed in motion.  But I am impressed how far you have come.”

Judges comments: Len: “I don’t know about Latin Week but it you had to take your shirt off.  Too get a 10 you had to do something special, and that was not it.”  Bruno: “You put so much into it you lost a bit of steadiness.”  Carrie Ann: “What you need to do to get a 10 you need to put and end on your move.”  Ricky: “I see what they are saying but I was living the moment and I was flying with you guys.  I was blown away.  You need to stay in the show.  The passion that you had was amazing.  it was beautiful.”

Judges comments: Bruno: “Now we are in business.  That was an Argentine Tango.  Great legs.”  Carrie Ann: “The confidence was there the game was on.”  Ricky: “You are focused.  IT was clean, it was superb.”  Len: “No messing about you went right into the routine.  Well done.!”

Judges comments: Carrie Ann: “WOW, you blow me away.  I thought Salsa maybe not the right match, but you totally surprise me.”  Ricky: “I love what you are doing.  It gets better and better.  It was amazing.”  Len: “My feeling is that it got a bit too involved in the production.  It was  a little hectic.  You don’t need that you are so good.”  Bruno:  “Meryl the leader of the gang with plenty of bang.  You can go down and dirty, but Maks who would not.  You were dancing in front of 6 of the best professionals in the country and you held your own.  I salute you!”

Judges comments – Ricky: “That was complicated and it looked like it was a walk in the park.”  Len: “It was together and it was tight. Well done!”  Bruno: “It was like an extra large tequila.  A couple of sync problems.  But incredible fun.”  Carrie Ann: “The group dance was suppose to be all about sync.  But I thought it was high energy.”

Judges comments: Carrie Anne: “That was insane I have never seen a tighter group performance.”  Ricky: “Congratulations, mad respect.  Incredible.”  Len: “I am telling you it is fantastic.  Watching the dress rehearsal is different because the pressure is off. “ Bruno: “That was slick, spectacular – this is worth a repeat performance.”