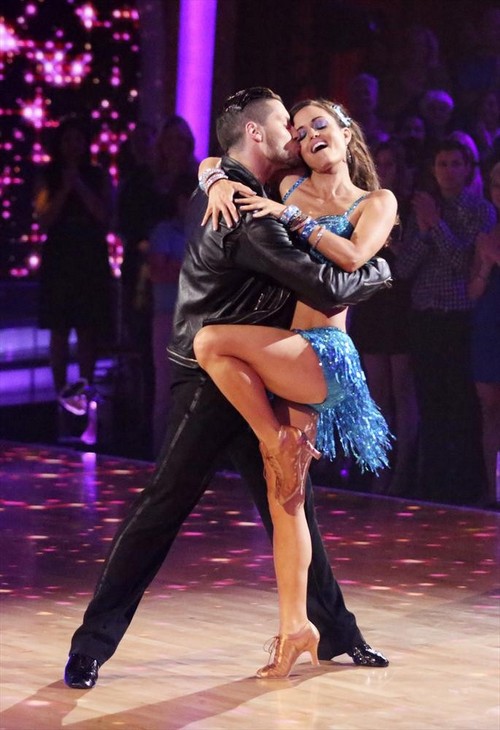 Wonder Years actress and author Danica McKellar danced a Salsa, on tonight’s season 18 episode 7 of Dancing with the Stars with Vaks Chmerkovskiy for the Latin themed music evening. We posted a nifty bio of Danica so you can get more familiar with her.  Ricky Martin joined Len Goodman, Bruno Tonioli and Carrie Ann Inaba as a guest judge for the evening.  If you missed tonight’s show you can read a full and detailed recap, right here.

Ricky Martin kicked-off the night with a show-stopping opening performance of his 2014 World Cup song “Vida” accompanied by the Pro Dancers.

On last episode Danica performed a Cha Cha Cha and Bruno loved it saying, “You have the vivacity of a purring kitten.  That Cha Cha Cha was so difficult you did it naturally.”   They scored Danica 36/40.

Danica McKellar and professional dancer Val Chmerkovskiy: dancing a Salsa.  Danica has been getting ready for her dance tonight.  She tweeted, “Had rehearsal today.. it’s tough dancing with a broken rib. @iamvalc choreographed an amazing routine- fingers crossed I can pull it off! :”

Judges Comments: [Bookmark this page and come back.  We will be uploading judges comments and scores when they are released.]   Vote for Danica McKellar and professional dancer Val Chmerkovskiy at Voting #: 1*800*868*3403