Chris Hemsworth And Elsa Pataky Fight Over Elsa Posing For Playboy Magazine: He Says It’s No Place For A Mother! 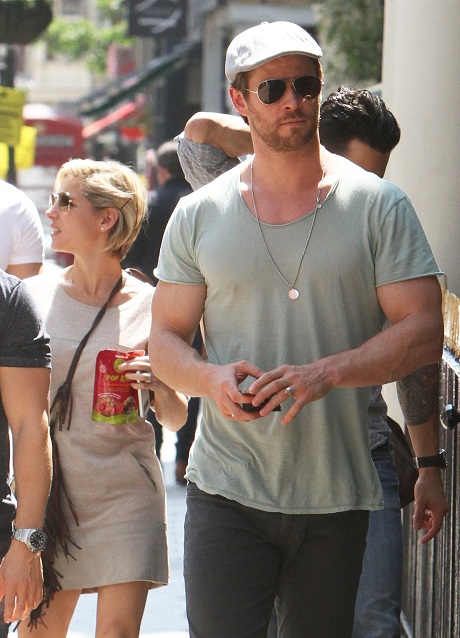 Chris Hemsworth and Elsa Pataky have been married for a few years, but they’ve managed to stay relatively low-key, especially since they’ve had children. It’s a far cry from Elsa’s ex-famewhoring ways, when she was with Adrien Brody and would often call the paparazzi in an effort to be photographed more. Maybe she’s finally gotten over her desire to become a famous movie star? Now, she just seems content to be a celebrity wife, probably because she’s married to freaking Thor. Who wouldn’t be happy being married to Chris Hemsworth?

However, a new report from Star Magazine claims that there might be some trouble in paradise, all thanks to Playboy Magazine. Apparently, Elsa brought up the idea of posing for Playboy to Chris, and he was not happy with the idea at all. Witnesses who claim to have seen Chris and Elsa arguing over lunch at Craig’s recently tell Star, “She said it would be a great career move, but Chris wanted nothing to do with the conversation. He said it would be inappropriate for a woman with such small children to pose naked.”

Um, sexist much? What about Chris posing half-naked in every Thor movie? Well, I guess that’s his job whereas Elsa posing for Playboy… is not her job. As Celebitchy pointed out, I’m guessing that Chris disagreeing with Elsa has a lot more to do with his career than the idea that a mother with young children can’t pose naked. What, so a mother with older children can pose naked, no problem? Also, what guy would be happy with his wife posing for Playboy? And when I say this, I’m discounting reality stars and the Kardashians, of course.

Chris is a pretty private guy, and having his wife pose for Playboy is sure to invite a lot of unwanted attention into his life. Plus, it’s just become unclassy to pose for Playboy, and if he’s trying to make it on the A-list tier of movie stars, his wife posing for the magazine definitely wouldn’t fit the company line.

What do you think about the Chris Hemsworth/Elsa Pataky marriage?