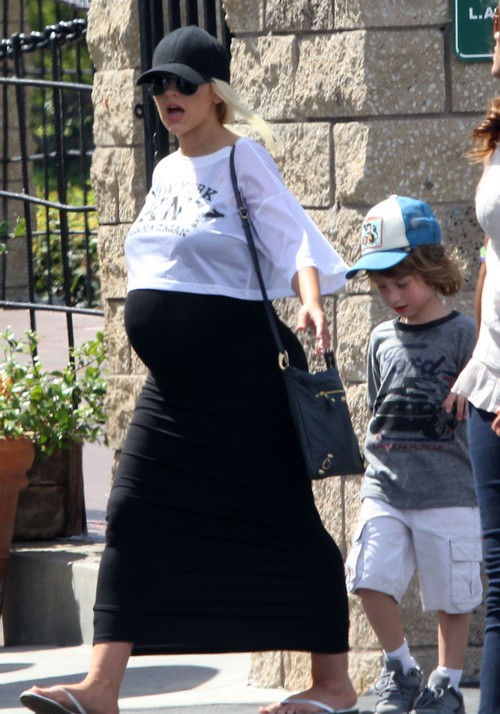 It was revealed in February 2014 that pop singer and voice judge Christina Aguilera was pregnant with baby number two, not long after she announced that she and her long-time boyfriend Matt Rutler were now engaged. Six months later Aguilera is very pregnant, but isn’t letting her huge baby bump get in the way of spending time with her six year old son Max (from her first marriage with ex Jordan Bratman).

Christina Aguilera, baby bump and all, was spotted out and about on July 12th with Max and fiancée Rutler, the family was photographed playing mini golf in Studio City, California. Christina and Max walked hand in hand smiling at the paparazzi, considering how shockingly huge the expecting mother’s baby bump was, she appeared to be in good spirits.

We can’t help but wonder if Aguilera “kidnapped” anyone at the golf course during their family outing. The pregnant pop singer was just in the tabloids after a bizarre shopping trip at a baby boutique in which bystanders claim she kidnapped them. According to Star Magazine Aguilera marched in with her entourage and ordered employees at the store to lock the doors, no shoppers were allowed in while she was shopping. And, none of the shoppers that were already in the boutique were allowed to leave, they were forced to sit inside the store and wait for Aguilera to finish shopping and unlock the door.

It probably would be pretty difficult to enforce a lockdown at an outdoor mini golf course though. Perhaps the family trip was just a coy way to clean up Aguilera’s rep after her pregnant diva shenanigans at the baby boutique.

A very pregnant Christina Aguilera and her fiance Matt Rutler take her son, Max Bratman, out to mini golf in Studio City, California on July 12, 2014. Christina looks like she is ready to pop and her son seems to be loving the idea of being a big brother as he is seen with his hand over mommy’s bell