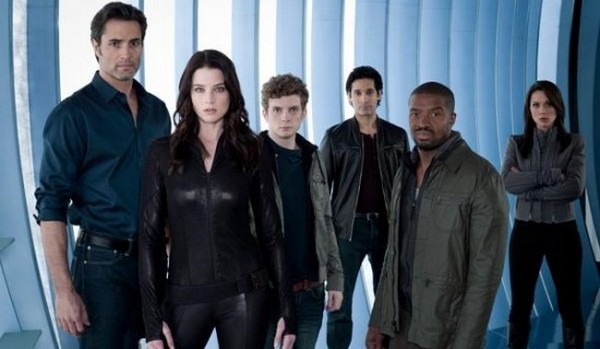 Syfy’s series CONTINUUM continues with a new episode tonight and the penultimate one called, “The Dying Minutes.”  On tonight’s episode, Kiera and John Doe work together to put an end to the Freelancers; Scar Alec is rescued and reunited with Emily; and Carlos finally pulls himself together and resolves to take control of the VPD from Piron and Dillon.

On last week’s episode a direct attack from Liber8 put Kiera and John Doe in danger; at the same time, they confronted the harsh realities of their relationship’s origins. Meanwhile, Alec struggled with the fact that his new invention is responsible for Jason’s increasingly odd behavior.

On tonight’s episode Kiera and John Doe work together to put an end to the Freelancers; Scar Alec is rescued and reunited with Emily; and Carlos finally pulls himself together and resolves to take control of the VPD from Piron and Dillon.

Continuum season 3 episode 12 airs at 10PM on SYFY and we will be live blogging it with all the up-to-the-minute details. So make sure to come back to this spot and spend the evening with us! Make sure to refresh often to get the most current details and updates!

The revelations from last week have left bad taste in everyone’s mouth. They now know how much they’ve been used and some of them have decided on breaking free of any remaining chains.

Liber8 has been disbanded but that doesn’t mean Sonya, the most idealistic of them, is willing to give up changing the future in her image. She’s bent on taking down the corporations and to do so she needs Theseus’s help. Not the Julian she knows.

Sonya got him to get her the semantics of Alec’s building. She wants to use a program Lucas built for her to poison Halo. If she can do that then people will stop running out to buy it. Because, despite the current Alec’s plan to build a new and better world, he’s still impinging on people’s right. His wrist bands are only supposed to be for health purposes. Yet what they really do is detect crime. If someone was about to commit an offence then Halo would immediately pick up on it and the police would swiftly move in.

At least, that’s why Inspector Dillon is such a huge fan. All the time they’ve spent fighting Liber8 and this new technological war has slowly drained him of his once notable and high morals. He’s now firmly of the opinion that there could be something behind martial law and a general lack of personal freedom. And Carlos hates to see him turn into that.

They were both conveniently at Alec’s headquarters when Sonya was spotted leaving the building. She had just broken in and after receiving help from Julian while also returning it in kind she was caught trying to escape. Carlos saw and was arresting her, but Dillon tried to intervene. It seems he didn’t want to catch Sonya – he wanted to kill her. And he wasn’t afraid to do it out in the open.

Something is going on with the Inspector. Carlos accused him of buttering up the one percent though he never could imagine Dillon would go that far to prove his loyalty. Even after they took Sonya into custody – she wasn’t safe. Dillon called in a “prison transfer” detail to come get her. However, no one will ever know what they were going to do with her.

Sonya had a back-up plan if she got caught. She had planted explosive into her arms earlier that day and so once she told Dillon his judgment – guilty of course – she blew up the squad room. She didn’t survive but Dillon did…barely.

Travis and was planning on running away with Sonya. He wanted to live out a normal life with her. Although that was never possible as long as she held on so tight to her ideals. She told Julian about the future (the one she grew up with) and she told him about his fate. Julian was hurt to find out that he became a murderer. Though in this timeline things can change. The one thing that can’t is him becoming Theseus and leading people to freedom.

Sonya made her choice to leave behind Travis and give Julian powerful information. And just like with everything else there’s bound to be consequences for it!

Kiera also didn’t sit around doing as she was told. She and Brad, formerly known as John Doe, broke into the freelancers’ headquarters and released Scarred Alec. The Alec out now has done nothing but push the world closer to an economic collapse. So she wants to try fixing the future with a different Alec.

They reclaimed Alec and even killed some of their most hated enemies among the Freelancers. What they didn’t do though was kill Catherine…that was actually Chen that stabbed her numerous times.

Chen never forgave any of them for the way he was “recruited.” With all this talk about a better world, he thinks the world has greater chance of survival with the original Freelancer back at the helm. So he freed the man that went back a thousand years to stop time manipulation. Is there another “trip” in this man’s future?

As for Scarred Alec, he has his freedom back and he’s also seen Emily. But is that enough to give him back his strength? Because everyone is picking a leader in this fight and we’ve already seen Alec pick the selfish choice over the right one. Can he do better with a second chance?