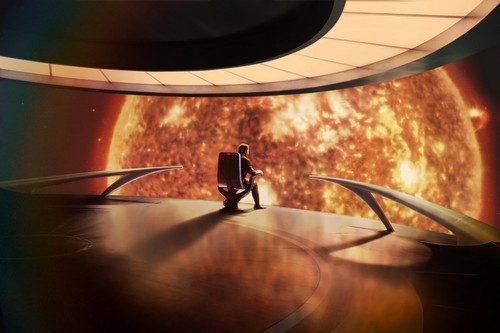 Tonight on NBC Carl Sagan’s stunning and iconic exploration of the universe as revealed by science, COSMOS: A SPACETIME ODYSSEY returns to NBC with a new episode called, “Deeper, Deeper, Deeper Still.”  On it, a look at exotic life forms that are invisible to the naked eye; an examination of the parts of the brain responsible for the sense of smell and memory; a journey beneath the Earth’s surface to discover a mysterious particle.

On last week’s episode the Ship of the Imagination traveled back in time to reveal 11th century Europe and North Africa during the golden age of Islam, when brilliant physicist Ibn al-Haytham discovered the scientific method and first understood how we see, and how light traveled. Later, William Herschel discovered the infrared and the signature hidden in the light of every star, eventually unlocking one of the keys to the cosmos in the all-new “Hiding in the Light” episode.  Did you watch last week’s episode?  We did and we recapped it right here for you.

Tonight is going to be another interesting episode of Cosmos for sure and you’re not going to want to miss a minute. Tune in at 9 Pm EST on NBC and we’ll be recapping it right here for you but in the meantime, hit up the comments and let us know your thoughts on the show so far.

RECAP: There are more atoms in your eye than in the entire universe; Neil mentions how he’s made up of 3 billion and billion and billion atoms. Atoms with matter do funny things, temperature moves fast to make bonds weaker creating evaporation to water. Neil introduces an animal that’s been around for a long time, for every one of us there is a billion of them; they are extremely small creatures that they can’t be seen with a mere man’s eyes. These creatures of lived through every extinction throughout history, the Tardigrades. Stomata are where plants breathe through, it’s their mouths; they can survive without us, but without them we animals wouldn’t be able to survive. To see where they keep their chlorophyll we would need to shrink down to a microscopic size, if we could steal their secrets we could make a revolutionary discovery.

We are in the Cosmos, contained within a dew drop we are on an industrial mission. A chloroplast is creating sugar, to see how it’s done we need to get smaller to atomic scale; it shows us the heart of the molecular complex. It slows down things to show us how it works; there are two shifts; one during the day and one during the night. During the day it gathers solar energy, while at night it stores it. The solar paneled biosphere collects six times more power than our entire civilization, impressive. If we could figure out the trade secrets of photosynthesis we would not need any other source of energy. Artificial photosynthesis could help with the current problems with global warming. Plants cover the surface of the earth for hundreds and millions of years, before the first flower was put on Earth. Shades of green and brown dominated during the age of the dinosaurs, until Orchids the first specie of flowers that arrived on Earth; it’s also the most diverse. The Madagascar flower’s pollen was hidden at the bottom of its stern. This made Darwin believe an animal with a long tongue must existed in Madagascar, no one believed him until a big Morgan’s Moth was discovered, it’s foot long tongue would extract the pollen from this plant. This moth species could have become extinct like other creatures do to deforestation. Neil talks about the fragrance of Lilacs, but how does a smell prompt a movie in your head, could it be form of energy like light? No it’s a molecule, whether it’s burnt taste or the smell of lilacs it’s molecules. When you inhale them they trigger some sensor in your nose that makes your brain remember memories, why does this happen with a smell. When our brains are stimulated by smell, it triggers a nerve in the brain which also helps remember things. This helps animals detect dangers coming towards it. There’s another hidden cosmos waiting for us.

Neil now talks about how plants are inhaling carbon dioxide and exhaling oxygen while we’re doing the opposite. Every breath we exhale is thrown through the air and is mixed in the contents of the air. When inhaling we inhale tons of molecules. There was a moment when we awakened to a new moment of thinking and seeing, there were merchants that shared several stories of kings and Gods. Acting, comedy and reinactments of popular stories was done far before, this was the beginning of power to the people. It also was the discovery that the working of nature could be explained without evoking the supernatural, Theolese was the first to find this out. It was the results of natural process to why nature changed the very idea of Cosmos out of chaos. This is the adventure that happened in the mind of Theolese, after his death another genius came along who discovered the hidden universes around us. Democritus a man who loved to party, he believed that atoms were all made up in a void, without atoms the world would be static. A mineral can be the same three atoms being repeated over and over again, a topaz has only 10 or so atoms, but it can also only repeat its structure of atoms. The carbon atom is essential for life, carbon is important because it can combine with several different types of atoms unlike any other creating much complex atoms. No other atom has the same flexibility as carbon. Proteins contain hundreds of thousands of atoms, carbon atoms are the back bone of molecules that create living things on Earth. Life can make enormous molecules, allowing it to evolve and love.

It shows the kid who was running with lilacs beforehand them to a girl, he then pokes her face for some weird reason; the girls dad sees this. Turns out that the kid didn’t touch her, each atom has a tiny nucleus in the center a cloud of force as the atoms approach each other the atoms push each other. The nucleus is surrounded by an electron cloud that is like a shield. The nuclei never touch. It then cuts to a church, Neil is walking around. The nucleus is small; it’s the size of a moat of dust in a cathedral. To understand an atom we need to go to a place, a hundred times smaller than an atom to see the nucleus. Hydrogen is element number one, when a nucleus has two protons it will have neutrons that need to keep the protons in line. Two protons is helium element number 2, carbon has six. A gold atom has 76 protons. Every additional proton in the nucleus needs enough neutrons to keep it in control. There are atoms where the nucleuses do touch each other, the sun looks like a solid object, but it’s not. It’s so hot all of its atoms are in their gashouse state; the barking streams that dwarf the Earth are guide by magnetic force. The sun is hot because of its gravity squeezing atoms together; the heat is caused to the movement of the atoms. The heart of the sun has atoms going so fast they eventually touch. The particles of light move slowly to the Earth from the sun, it’s hot enough to fuse hydrogen, but not enough to fuse helium. There are other stars that are able to fuse helium and carbon. Stars go super nova every century, it’s so bright that it rivals the entire galaxy. All that light is only one percent of the energy; a particle takes up the other percentage.

The neutrino a large light detector is trap to catch neutrinos only, matter poses no obstacle when it comes to neutrino; it could pass through a hundred light years through steel. When a neutrino is caught it shows up as a ghostly ring shape, when a super nova blew its top in 1897 it would looks like the neutrinos that are being shown. The neutrinos hit Earth before anything else could, we are then shown a dead star walking, within it something cataclysm is happening; it’s exploding inside. The shockwave of the gas is one thousandth of the speed of light, before reaching the super nova of 1897. Neil explains how gravitational energy is used to make this swinging cannonball to begin to move, as it swings its exchanging two kinds of energy for one or the other. When the cannonball starts moving, it won’t be able to go faster without aid. In some radioactive atoms it can spontaneously launch an electron. Wolfgang Polly believed that a phantom particle existed, though it didn’t work out the way he wanted. Scientists still try to ride on those neutrinos from the beginning of time.

A temple was designed so that the sun’s rays could only enter on two certain days of the week, it would shine on all the Gods except for one Ta the God of creation. We have ten million year old light on our face each day, the universe is so old that ten million years ago seems a long time for us, but it’s only the length of an afternoon for the time scale of the cosmos. Our Milky Way galaxy is ten thousand years old, there’s something that keeps us from going back in time, the nature of life and time; to look back in space is to look back into time. The farther we see the older time is, we can only see a baby picture of the universe. Imagine that all the matter of energy in the universe was concentrated into this little ball, it’s a trillionth in a trillionth and a trillionth of the size of the universe. The Big Bang must have created tons of neutrinos, now neutrinos from creation are within us.