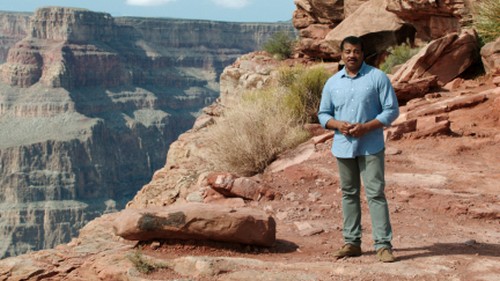 Tonight on NBC Carl Sagan’s stunning and iconic exploration of the universe as revealed by science, COSMOS: A SPACETIME ODYSSEY returns to FOX with a new episode called, “The Clean Room” on it we take a look at the work of geochemist Clair Patterson (1922-95), who calculated the age of the Earth—4.5 billion years—using a uranium-lead dating method, and also drew attention to the dangers of lead in the atmosphere and the food chain.

On last week’s episode we took a look at exotic life forms that are invisible to the naked eye; an examination of the parts of the brain responsible for the sense of smell and memory; a journey beneath the Earth’s surface to discover a mysterious particle.  Did you watch last week’s episode?  If you missed it we have a full and detailed recap, right here for you.

On tonight’s episode host Neil deGrasse Tyson takes us to a time before the Earth was formed to learn how one determined scientist discovered how old our planet truly is.

Once there was a man who went searching for the true age of the Earth, on his journey doing so he met struggles along the way. Geochemist Claire Patison, known as Pat knows that everyone is in danger of an invisible menace. He’s determined to put a stop to it no matter the cost. Neil Degrasse Tyson takes on another adventure into the Cosmos, you can’t tell Pat’s story without going back long before the Earth. When the stars brought forth its substance, iron for the planets molten core, oxygen for the rocks, warmth and air. Carbon for diamonds and life. A star is born, ours. For the first few million years’ things ran smoothly, but when objects grew larger they began pulling each other into crossing orbits. Usher searched for an event into the bible, he found a story of the death of Neberkenezer; he discovered the world began on October 2nd on a Saturday. The rock layers are made of sediments, fine grains. Over eons sediments were compressed into rocks, the oldest ones located at the bottom. Any layer can be chosen; once upon a time there must have been shallow water in the canyon he’s standing in front of. He points at another layer, it shows tracks that were around 60 million years ago. Add up all the layers to discover the age of the Earth, but sediments can be laid down at different rates. Foot sediment lowers a thousand years. Many geologists’ tried this method to discover the age of the Earth, but never did they get a precise answer because the deepest forms of rock aren’t the oldest.

Are there any mementos from when the Earth was born? Neil knows where to find it; it’s in the orbit of Jupiter and Mars. A million or so years ago a large asteroid hit a smaller one, changing its trajectory and sending it elsewhere. Fragments of the iron asteroid in Arizona have stayed intact, if we found out the age of the iron from the asteroid we could learn something new. A uranium atom first becomes a thorium atom and it’s unstable and turns protactinium, it then goes under ten more changes turning into lead last. Lead will remain for eternity. Hit lead with a hammer, boil it in oil, vaporize it and the nuclear clock keeps on ticking. We’d need to use the uranium atom to find out the beginning of the Earth, if we could count how long it took for lead to turn into its current form we’d know how long it’s been around for. Measure the amount of lead in meteorites to discover the age of Earth. Harrison Brown first understood this, he chose Claire Paterson to do the work. He had no idea this work would change his life and the world’s also. What seemed like pure scientific research turned out to be so much more?

Claire was a natural born scientist, a geologist named Harrison Brown gave him what seemed like a straight forward experiment. Harrison told Claire about Zircons and how Uranium becomes Lead; if he could figure out how it becomes lead he would learn the first age of the Earth. Claire continued trying to make this discovery on his own. A man named George did the same with another mineral; George’s results were always the same while Claire’s never made sense. He though the lead was contaminated with other minerals. He did everything he could to cleanse the lab, a month later he received weird results having a hundred times more lead. Claire realized he’d need to boil his containers in acid to reduce the amount of lead in his lab. He then realized he’d need to build his own lab from scratch. Claire started tracking down and checking for lead that kept interfering with his lead; he finally built a machine to measure the amount of lead in an object; now he was able to tackle on finding out the age of the beginning of the world. Claire used a mass petro meter to find the last missing piece to discovering the truth of the world’s first age. Having isolated the sample from lead contamination was now ready to calculate the true age of the Earth. The world is four and a half billion years old, Claire finally discover the first age of the Earth. Claire wanted to let his mom know that he struggle for so many years to discover the true age of the Earth, with its problems arose.

Neil shows us columns of an old roman temple dedicated to Saturn, masters will serve the slaves and no executions of war were allowed. Saturn had a darker side; he committed unspeakable acts of evil to his father and devoured his own children. The God of lead had many negative aspects to him, though people knew lead would poison them; they made pipes that carried water through their civilization was made of lead. What metal did they use to run a bath or to unsweeten their wine? It was lead. The widespread of lead was the declining downfall of the Roman Empire; it was cheap and easy to work with. Lead was at first a safe distance from humans underground, but humans learned to dig into the ground and extract minerals. Why is lead so poisonous to us? It is because it mimics other metals like zinc and iron, lead cannot fulfill the needs of our bodies. It interferes with the molecular structure of our body. The making of leading paint persuaded people that it was safe for children, this led to problems. Lead production didn’t shift into high gear until the 1920’s. Manufacturers though that they could make money with leaded gasoline; this had people end up dying while working within the factories. Robert was a scientist who was hired to show scientific research on how lead is actually harmful to people.

Claire Paterson’s research made him the leading expert to lead. He set out to discover everything about how lead circulates around the environment, he measured the concentration of lead in deep and shallow water; there were only concentrations of lead in deep water. Paterson said that leaded gasoline is what is affecting the amount of lead found on the surface of water, he then wrote a scientific paper to help get rid of lead gasoline. Only three days after publication, the push back began. Patterson was met with a ton of people who were interested in his paper; they wanted him to do much more with his studies. He wanted to figure out the amount of lead in polar ice caps, though these people wanted him to change his studies. Patterson then said that lead is a neurotoxin, when it leaves the tail pipe of cars it’s causing harmful side effects to people. These people only wanted to change Patterson’s research, because he could ruin their company of lead gasoline. Patterson lost the money behind his research, but other groups of people ended up help fund his research. Patterson and his team went to recover snow that’s been around for many years. As with the oceans he found that the amount of lead was low in snow. The naturally occurring levels of lead in the water of the past were far lower compared to his time. Lead was known to cause mental illnesses and anger problems within people, he discovered a mass poisoning going on in civilization. The public was persuaded to think they were fine and that Patterson was crazy.

Patterson went public with his findings about lead; he sent several copies to many influential senator leaders. Hearings were scheduled to take place when Patterson was away, one day he surprisingly arrived at one of the hearings, to speak about how lead is going to end up killing people. Patterson fought the industry for what he believed in, after ten years he succeeded. Now there are a no signs of a toxic level of lead in people today, thanks to Claire Patterson.