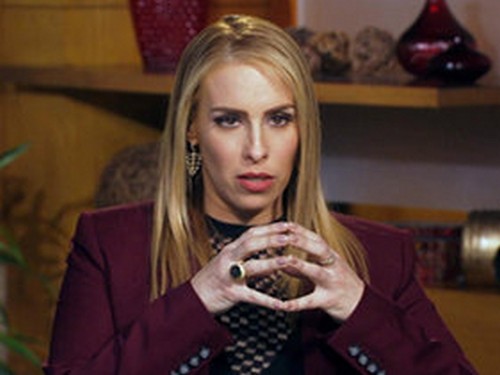 Tonight on VH1 is the 4th season premiere of COUPLES THERAPY called, “New Couple Controversy.” On tonight’s show Dr. Jenn gets to the bottom of Taylor’s breakdown during an emotional group session.  Did you watch last week’s premiere episode?  We did and we recapped it, right here.

On last week’s show the couples dove into their first group therapy session, where they each discussed the darkest moments in their past relationships and how that impacted them today. Taylor discussed the horrifying abuse she experienced with her ex-husband Russell, and how she found him hanging in the closet after he committed suicide. While Kelsey discussed the abuse she experienced in a relationship, she revealed that she was a stripper when she was younger, which infuriated Ghost. Dr. Jenn had a revealing therapy session with Farrah, where she discussed her infamous ‘sex tape’. After all of the emotional therapy, Dr. Jenn sent the group out for a fun night on the town, where Taylor and Farrah butted heads. Later after the group returned, Taylor and John blew up complaining about their accommodations and threatened to leave.

On tonight’s show as everybody gets deeper into therapy, the couples begin to get more frustrated with their partners, and also with the other people in the house. In an explosive group therapy session, Dr. Jenn calls Taylor out for how rude she was the night before, complaining about the living accommodations, to which Taylor cries and blames it on her wanting to please John. Ghostface’s offensive comments in group set Kelsey off, and she storms out in tears. After therapy, the group learns that a new couple is coming into the house, Jon Gosselin and his girlfriend Liz. The entire house reacts to him being in therapy, and they discuss his tumultuous relationship with his ex-wife Kate. Jon and Liz have a therapy session where they discuss their relationship, and it is clear that Liz is not a very considerate partner to Jon. After much speculation about Farrah’s sex tape, Whitney and Sada finally watch it, and are shocked by what they see.

Tonight’s episode is going to be another drama packed one, which you won’t want to miss. So be sure to tune in for our live coverage of VH1′s Couple’s Therapy Season 4 episode 3 at 9PM EST! While you wait for our recap, hit the comments and let us know how excited you are about the new season of Couples Therapy tonight.

Tonight’s episode of Couple’s Therapy opens with some drama. The couples all went out to dinner together, and Taylor obviously has had too much to drink. When they return Taylor and John threaten to move out of the house. She calls Dr. Jen and tells her that she isn’t “used to living like this,” she’s upset because her room is too hot and she has to use “pea green towels.” She says she “can’t live in these conditions.” She would rather have “filet mignon and lattes in her own home.”

The next day Dr. Jen comes in and brings in all of the couples to talk. She says that “never in her life has she seen such an entitled tantrum.” She wants to know what is really the problem with Taylor. Taylor thinks that she is being “underfed.” John confesses that he thinks he caused her meltdown because he threw a fit that his room was too hot. Taylor is scared because “reality TV already killed one person in her life,” and she is scared that it is hurting John too.

Kelsey confesses that she is like Taylor, and she is afraid that if she doesn’t go along with what Ghost wants then she will lose him. Ghost brings up the fact that he just found out she was a stripper again. Ghost and Kelsey break out in a screaming match, Kelsey is upset because Ghost said he “bagged her.” Dr. Jen interrupts and tells Kelsey, “Don’t ever let another human being define your worth.” Kelsey walks out of their group therapy. Dr. Jen asks Ghost to go with her, but Ghost refuses.

Taylor says it is “heartbreaking” to watch Farrah in therapy, because she reminds her so much of herself. Taylor says that she thinks that the reason Farrah tries to sing, write, act, etc is because she is trying to make people love her. Farrah is offended, therapy is a place “for them to be open with each other, not have to deal with hatred.” Dr. Jen interrupts and tries to remind Farrah that Taylor is not attacking her, and that people in the house want to become closer to her.

Ghost talks to Kelsey after therapy and tells her that he loves her, and she “knows what it is.” Dr. Jen is concerned because Kelsey doesn’t speak her mind to Ghost. Kelsey defends Ghost’s behavior to Farrah, she thinks it isn’t his fault that he treats her like crap, it’s just the “world he lives in.”

Jon and Liz head to the smoking section outside, and Whitney and Sada begin questioning them. Jon reveals that Kate is suing him right now, and his girlfriend Liz has three of her own children. Liz confesses that she is nervous that everyone is going to think she is “mean to Jon.”

Later that night Liz and Jon discuss his wife Kate, and how judgmental she is. Liz gets annoyed with Jon and tells him to “stop playing the victim.” Before they can argue anymore, they head into therapy with Dr. Jen. Jon tells Dr. Jen that they met in a bar, and went home together. Jon gets annoyed because Liz keeps referring to him as “Jon Gosselin.” When she uses his first and last name it makes him feel like she is talking about the reality star persona, not who he really is. Jon is tired of being “haunted by his past every day.” He confesses to Dr. Jen that Kate is currently suing him in court, he is accused of selling scandalous stories about Kate to a book-publisher. Jon desperately wants to marry Liz, but she is scared to take it to the next level.

It’s Day #5 of Couple’s Therapy, and the couples are beginning to get restless. Farrah confesses that the only thing she has to look forward to in this house is waking up and doing her hair.