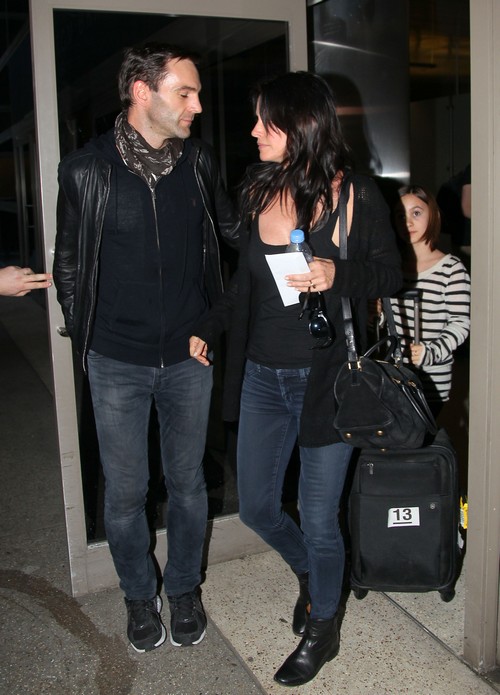 5 months is a drop in the bucket in terms of a new relationship however for Courteney Cox it’s apparently long enough to decide to build a life with Johnny McDaid. The actress was very candid about her struggle with infertility when she was trying to conceive her daughter Coco and friends’ say that 50 year old Cox has been back on the baby track for months now. She has been spotted at the fertility doctor’s which would definitely seem to indicate that her plight for another child is pretty serious.

According to the April 14th print edition of Star magazine Cox and McDaid got serious very quickly, so fast that having another baby has kind of seemed like a no-brainer and earlier this week we did learn that the couple is now living together. Perhaps that baby fever has morphed into a real pregnancy and that is one of the reasons why the two are now shacking up. Do you think that Cox really believes that McDaid is a great love match for her or is she simply trying to keep up with her ex, David Arquette who is now expecting another child?

Is Cox’s relationship with McDaid the real deal or do you think he is just basically a means to an end- another baby and a more level playing field with her ex? Or is she just really tired of playing the dating game and ready to settle in like she once was and McDaid seems to at least be a pretty decent guy? Do you think Cox is already pregnant or just trying to make it happen? Tell us your thoughts on this fairly new couple in the comments below!