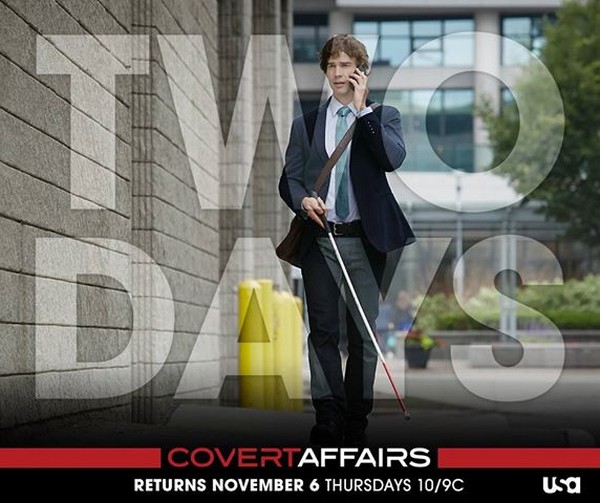 Covert Affairs continues tonight on the USA Network with an all new Thursday, November 6 season 5 episode 11 called, “Trigger Cut.” On tonight’s episode after a long hiatus Covert Affairs returns with their mid-season premiere and on the episode, Annie [Piper Perabo] heads towards Istanbul where she hopes to apprehend Belenko.

On the last episode in the mid season five finale, despite Auggie’s wished, Annie helps McQuaid with a tough mission. Elsewhere, Hayley was determined to find the truth before disaster strikes U.S. soil. Did you watch the last episode? If you missed it we have a full and detailed recap, right here for you.

On tonight’s episode as per the USA Network’s synopsis, McQuaid’s health hangs in the balance; Annie seeks information in Istanbul; Arthur takes control.

Tonight’s episode looks like it’s going to be great and you won’t want to miss it, so be sure to tune in for our live coverage of USA Network’s “Covert Affairs” at 9:00 PM EST! While you wait for our recap hit the comments and let us know how excited you are for the seventh episode of season five of Covert Affairs tonight

On tonight’s episode of Covert Affairs, while Annie is hanging out at the hospital holding a vigil for McQuaid’s quick recovery – her friends are dealing with the fallout Caitlyn Cook had created. Auggie and Arthur know Caitlyn hadn’t acted alone when she nearly bombed the diplomats’ motorcade.
Plus, if she had carried out her mission then that would have been her second attack on US soil!

Auggie and Annie suspect Aleksandre Belenko was her partner but if his own close friend Tony in the Diplomatic Core doesn’t believe (at least not on someone like Annie’s word) then who will. Caitlyn is dead and her secrets went with her. Which means Belenko is free to continue to work towards their agenda. So Arthur has found a way to trace all of Belenko’s possible allies.

Currently, Belenko was making some shady deal overseas. So Arthur had Annie on the next flight out to Istanbul and he only looped Joan in once Annie had already touch ground. Not very sportsman like. Then again that’s typical how Arthur tends to act. Especially with a mission. It’s like once he’s in control then he’ll merely fill people in as much as the situation requires.

But that happens to leave people on loose ends. For instance Auggie hadn’t known that Annie had left the country and so to hear it from Joan – it made his already fraught relationship with Annie that much weaker. And to be frank, its practically holding on by a string. Last season the two of them had been suffering from some trust issues (mostly on Annie’s end) and being kept in the dark isn’t going to help Auggie get over that anytime soon.

She needs him as much as he needs her. Though she’s lucky to still have friends in the spy community that were willing to fill in the gap Auggie had left. Eyal had surprised her with a visit. He was in the country at the time to make an assassination and soon he saw for himself that Annie needed him.

And Stefanie did the job she was asked. She went on assignment to sleep with an older and wealthier man. And then she left his hotel suite with all the info she was told to gather. The one downside to the whole thing was that Calder had to wait for her outside and listen in while she slept with someone else.

After Stefanie met with her client, she had a change of heart about accepting Calder’s money. She told him from now on that she was willing to work for him for free. Her one condition being that Calder stays in charge of her. So he agreed to her demands.

As for McQuaid, he was rushed into surgery while Annie was still abroad. So she felt guilty that she wasn’t with him. But not guilty enough to get on the next flight home. When Auggie did finally deign to reach out to her – he told her Belenko was nearby her location. She then went to say something else to him like an apology though he hung up before she had gotten the chance.

Annie was then going to do some surveillance work Belenko yet he somehow beat her to the punch. Belenko asked her to meet him. It seems he was done with playing around. And said he just wanted to talk.

Eyal told Annie not to go in and like usual she ignored him. She thought she’d be able to handle herself in a crowded dinner room. However that’s not where Belenko was meeting her. No, the other man had arranged for a “private” meeting.

And rather be conscious around him, Annie ended up showing her hand. Belenko was making her out to be a stalker. He said he couldn’t understand why she was so obsessed with him – so Annie hit back. She told him that Caitlyn had told her about the wedding ring.

When Belenko had heard that, he quickly acted to get rid of her. Though Eyal once again proved to be useful. Eyal and Annie escaped Belenko’s men. But Belenko wasn’t finish with them. He reached out to the states and at first all it looked like he did was getting Tony fired.

Tony was sober for nearly four years before he got fired and all of his good work blew up the second he did. Later, doctors said he died from alcohol poisoning but Auggie didn’t buy that story. He believes his friend was killed and he feels like Tony was only supposed to serve as a message.

Belenko wanted them to back off!