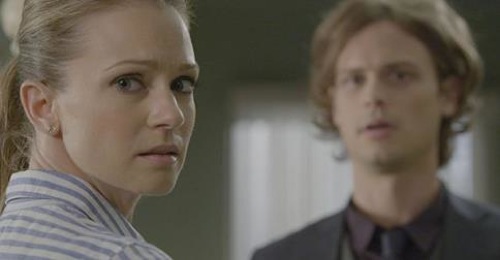 Tonight on CBS Criminal Minds starring Thomas Gibson continues with an all new Wednesday October 29, season 10 episode 5 called “Boxed In.” On tonight’s episode, a young boy disappears in San Diego on Halloween, just as another boy who vanished one year earlier suddenly reappears.

On the last episode, when a body was discovered in Atlanta covered in scratches, the BAU found that this death and subsequent murders were linked to an UnSub with an obsessive skin disorder. Did you watch last week’s episode? If you missed it we have a full and detailed recap right here for you.

On tonight’s episode when a young boy who went missing in San Diego on Halloween suddenly reappears one year later, the BAU must work fast when another trick-or-treater disappears under similar circumstances.

Hotch was finally getting the chance to spend some quality time with his son Jack when he got the call about a new case. One he couldn’t pass on to anyone else. A missing child had showed up after he’d been missing for a year. Someone had dressed him up in a Halloween costume then abandoned him at a pumpkin patch.

He was severally malnourished and while his case is disturbing, there appears to be evidence of a pattern going on with missing boys in that area. Hence the team had to fly out to San Diego to before this ugly pattern could repeat itself.

There was another young boy that had gone missing and he too was returned, malnourished, after a year. And he died from his condition before he could talk to anyone. Not only was the first victim weakened physically but someone had also emotionally tortured him. So when everyone at the time had believed they found a suspect – he had photos of the boy in his apartment – they tried and convicted him. Plus, it didn’t hurt that the pedophile in question had even confessed to the crime. However Morgan and Kate soon saw right through that confession when they went to go see Tanner in person.

Their “killer” wanted notoriety though he wasn’t the one behind the kidnapping. And because he wasted time with a false confession there was another young boy that went missing in the interim. Which brings us to the second victim.

He was treated a slightly more well off. Someone had made sure to give him vitamins and his records show he did eat more regularly than the first victim. Meaning the UnSub never wanted to kill someone. So the first boy’s death was an accident.

Although it doesn’t sound like much, the parents of the boy the UnSub recently abducted can at least be assured that whoever took their child won’t kill him. Despite warnings to both parents and kids to be extra vigilante with predator on the loose, the latest victim snuck out of the house in order to go egging with a couple of his friends. He thought that was more important than his own safety even though Hotch had go on the news to say their suspect was targeting young boys in his exact age group.

But that’s children for you! And that’s why the UnSub targets them in the first place. His profile revealed he was going after boys with disciplinary problems. The first one was toilet papering someone’s house on Halloween, the second was known to run away, and the third was egging people’s homes. And it all happened on Halloween.

Halloween appears to be very important to their UnSub. Hotch emphasized that when he went back in front of the cameras to make a public plea. He asked anyone if they know about a loner who can become extremely violent when he’s rejected and who might have been raised in an uber strict home.

Often people don’t respond to these public pleas with any information that could actual be of use but someone came forward this time with helpful info. A young woman said she thinks her brother is the man they were looking for. Their profile describes him to a tee.

As for the Halloween thing, her father who used to be abusive to her whole family and he had left them on Halloween. That night her mother allegedly had enough after she came home from the late shift and found her son locked in a trunk. His father had wanted to punish him over some small misdeed or another. And so his wife kicked him out.

Though that story ended up being a lie. Sandra was the younger sibling and she was hiding in her room as everything was going on. So she didn’t see what really happened to her father.

Her mother on the hand knows what did. She did come home and fought with her husband. But he hadn’t left on his own accord. She had murdered him and she had her son help her get rid of the body. When she told the guys about where she dumped the body – that’s where they ultimately found her son John.

John hasn’t been right since his father’s death. Afterwards, he used to torture animals but then that stopped when he met a girl. However that young woman left him for some else. Thus he was rejected for what felt like the second time in his life. His father rejection being the first.And that’s when he started going after kids.

He did to them what his father used to do to him. And he did it at the place his father was buried. It’s an old abandoned place sitting on a long stretch of land. So the team needed his assistance to find out where the boy was.

Yet John didn’t want to talk them. Thankfully, though, he was willing to talk to his mother. He told her where the boy was and when they got Hunter out of his cell he was for the most part in good condition. John had beaten up and restrained him. But, physically, he wasn’t suffering from anything that could cause any lasting damage. Except for his mental state, Hunter is going to be fine.

And so is the second victim. His health started to improve while he was in the hospital.