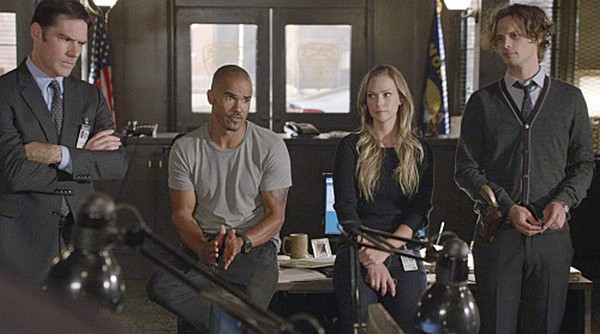 Tonight on CBS Criminal Minds starring Thomas Gibson and Shemar Moore continues with an all new Wednesday November 5, season 10 episode 6 called “If the Shoe Fits.” On tonight’s episode, young men are murdered in Utah and can you believe they are found with their cell phones stuffed into their mouths. Meanwhile, J.J. confronts suppressed feelings about her sister’s tragic death which he still has not gotten over.

On the last episode, when a young boy who went missing in San Diego on Halloween suddenly reappeared one year later, the BAU had to work fast when another trick-or-treater disappeared under similar circumstances. Did you watch last week’s episode? If you missed it we have a full and detailed recap right here for you.

On tonight’s episode The BAU is stumped to find the common denominator among male victims in Montana, making it difficult to profile the UnSub. Also, JJ must confront her feelings about her sister’s tragic death.

On tonight’s episode of Criminal Minds, JJ found herself stuck in a position she never wanted to face. Her son had asked her out of the blue about her sister. And frankly JJ wasn’t counting on telling him about Roslyn for another good few years.

But he was asking questions and she wasn’t prepared to answer them. Really, the whole thing was her mother’s fault. It was her mother had spilled the beans. The older woman felt it was time the family stopped trying to hide what happened. However, JJ felt that wasn’t her mother’s call. She and her husband had already discuss what to say to their son and they were holding off because they didn’t want to have to explain death to him while he’s so young.

Thankfully, though, she got a call to come into the office. So that stopped her from saying something to her mother that she possibly would have regretted.

The BAU had a new case and this one was stumping them. Two young men had been found murdered and their bodies were dumped in the woods. Someone was angry enough at them to stab them repeatedly yet there’s no record of the two victims ever having met each other. Or of them equally ticking someone off the same person to such an extent.

In all honestly, the victims were night and day. One of them was gay but was dating women in order to hide his secret. And the other was such a perverted playboy that he would secretly record sleeping with women. So one of the guys had theorized their UnSub was probably targeting people they’ve felt were being sexual deviants.
Yet their gay victim went to great lengths to hide his orientation so JJ offered up another option. What if their UnSub was a woman?

Women aren’t generally seen as the violent type but in this scenario JJ was proven to be right.  Their UnSub is a woman and she’s killing men that haven’t really done much TO HER. The latest guy merely came onto her using a rose as a prop. It was a bit cheesy yet the UnSub felt he was making mockery of love. So she killed him.

At first, the team categorized their culprit as a Female Annihilator otherwise known as a Black Widow. She believed she lured men to their deaths because she feels empowered by it. But the crazy just didn’t add up. The UnSub arranges her kills so that they each tell a story. She dumps the body by a luxury car, leaves behind an expensive shoe, and there’s sometimes ash (otherwise known as cinder) on the victim or near the victim.

Hence she’s not a Black Widow. She’s merely someone recreating Cinderella because she lost touch with reality. Whenever someone ruins her fantasy of living out a fairytale by expecting/demanding sex or not by acting gentlemanly enough towards her – she kills them. Yet the sad part is that there is someone interested her that’s willing to let her have the fairytale.

The guy she works with at dry cleaners happens to like her. So when his father was about to fire her from her job – he offered to be the one to let her down. Plus, he knew his dad was tempted to call the police on her. Ever since she started working for them – there’s been more than one dress that’s disappeared on her watch.

So Claire was given a reprieve. But she ruined any chance she had with her dream guy after he had offered her a ride to the cemetery so that she could visit her father’s grave. He had put off firing her so that he wasn’t cruel and while they were at the cemetery he figured out she was crazy. Her father wasn’t buried there although he is dead. But he died not long after he left prison for pedophilia.

Apparently her father had abused her and then one day he abandoned her. She was eventually put into the system and ended up with a foster mother that had already had three biological daughters. And that’s what to lead to Claire reverting back to her Cinderella days. Her father used to read that book to her before he dropped her off at the mall with a mere note tacked to her jacket.

But despite what her father did to her – she revered him.

And luckily Reid was able to use the fairytale she loved so much to convince her into disarming herself before she killed yet another unsuspecting man. Reid had to pretend to be Prince Charming and he had even brought along one of her shoes. Then he told her that he had carriage waiting for her and that allowed her to go with him willing.

Now maybe she finally be able to get some help!

As for JJ, she realized maybe it was better to talk to her son about the realities of life. And she had lessen the harshness of her story by turning into a “Once Upon A Time”.