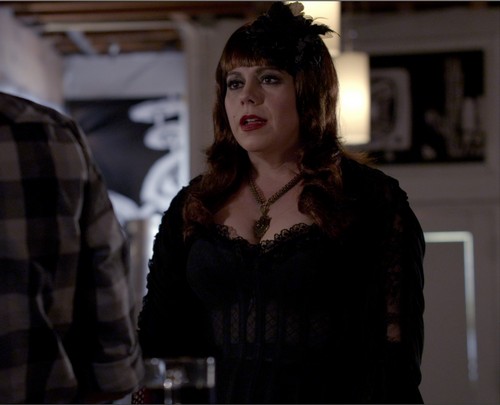 Tonight on CBS CRIMINAL MINDS continues with another new episode called, “The Black Queen On tonight’s season 9 episode 12 Garcia delves into her hacker past and reconnects with her old flame.  Did you watch last week’s episode?  If you want to catch up before tonight’s new episode, we have a full and detailed recap, right here.

On last week’s show when the BAU was called to Kansas City to investigate a series of murders, a tense reunion ensued between Blake and her father, a retired police captain, and her brother, a detective, who had to work together to help solve the crime.  Last week’s show was writte by Virgil Williams and directed by Glenn Kershaw.

On tonight’s show when the BAU goes to San Jose to investigate a string of murders, Garcia delves into her hacker past and reconnects with her old flame to help the team with the case.  Paolo Costanzo guests stars as Shane Wyeth, Garcia’s former love and fellow hacker.

Tonight’s episode helps explore Garcia’s past. She was first recruited by the BAU after getting taken into custody by Hotch. She was supremely intelligent hacker and Hotch was able to see her value. And he also was the one to introduce her to Morgan. Fast forward several years and the many nicknames and trademark jokes Garcia and Morgan passed between each other are being used as examples for the sexual harassment seminar.

It was embarrassing to sit in front of her colleges while everything she’s said was being analyzed under a microscope. Her saving grace though came from Hotch. There was new case he needed her special skills set for. Someone had flagged them down for a case and not through the normal channels. It seems there is a man on death row that a notorious hacking group wants to get noticed. They did this by stealing the case files.

This man is accused of killing several women. All reportedly hookers. He said it wasn’t him and swears he was coerced into a false confession by the detective on the case. The detective might have given the suspect, a known addict, newer and better drugs in order to get a confession. Said detective is retired now and frankly won’t risk his pension just to save someone else’s life. He’s enjoying retirement and if the squad keeps asking him questions then they better take it up with his union.

The hackers known as Star Chamber consider themselves to be revolutionaries. They’re trying to find proof of Sam’s innocence and they left a signature of their hacking job for Garcia to find. The main guy behind Star Chambers is none other than Garcia’s ex-boyfriend, Shane. Shane was more than her ex. He was also her mentor. The two of them had a very intense relationship that was mostly just them fighting and making up.

Shane had used her old hacking signature to grab her attention and then he used Sam to pass on a message. Shane wanted to meet Garcia and he wanted her to come alone. It wasn’t like she could refuse. Two more murders came up. The same Unsub that originally killed the hookers is back and picking up where he left off. This man is smart and the team is going need those case files back in order to catch him.

Garcia meets with Shane at his office. Of course she had to introduce herself by creating a grand entrance with the help of hacking. And Shane was impressed by it, but he knows she’s not the same girl as before. Under BAU guidelines she wasn’t allowed to get in touch with her old crowd and he was hurt that she missed the notice about his mother dying 8 years ago. What really grinded his gears was when he hacked her phone. He read Morgan calling her baby girl and was offended she allowed herself to be demeaned.

Shane is a narcissist. He’s been watching Garcia for a while now and has seen her with Morgan. Although she told him she wasn’t sleeping with Morgan; in Shane’s mind it’s a matter of time before she does. So she made a deal. She arranged to be like a competition. Whoever solved the case first wins but they had to have started on equal footing. He sends her the case files and she sends him the BAU profile on their killer.

As for the rest of the BAU they found something with the help of latest victim. This woman has erased all of her digital fingerprints (like the others) except one. She had left behind a burner cell with only one frequent number inside. The hooker’s regular told the team how she was with her lover when she got a random email. The BAU were able to figure out the Unsub sent out emails likes these to his victims. He wanted to make sure he wanted get caught by completely erasing anything in these women’s lives that lead back to him. JJ however recognized the wording in the emails as belonging to Sam.

The supposedly innocent man wasn’t innocent at all. Oh sure, he tried to claim he was helping the prostitutes by making their profession easier online, but that didn’t explain why he was carrying around his victims’ pieces of hair hidden in his prayer beads. He did commit several of the murders and the rest were carried out by his partner. Who is this partner? It was Shane right hand at Star Chamber. The guy wanted to use Shane to get Sam off of death row even while he continued killing.

Yet he was smart enough to know he would need someone new to pin the crimes on and he chose Shane. He was going to arrange it to make it look like Shane was not only guilty but dead as well.

It’s a good thing that the BAU are good at their job. They found Shane and their Unsub before any lasting damage. At least physically. Garcia had to tell Shane she won regardless of him being barely conscious. Yes she’s changed from the girl he used to know and yet not much. Rubbing his face in it is proof of that.

Garcia started out doubting herself and with the help of Morgan, she remembered who she became away from her old life.