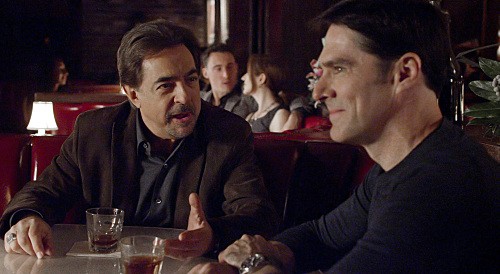 Tonight on CBS Criminal Minds starring Thomas Gibson and Shemar Moore continues with an all new Wednesday December 10, season 10 episode 10 called “Amelia Porter,” and we have your weekly recap below. On tonight’s episode, the BAU investigate a triple homicide in Salt Lake City and the probe reveals there may be a connection between the victims and a fugitive killer.

On the last episode, the BAU investigated random murders in northern Virginia and searched for a conflicted UnSub who had an uncontrollable urge to kill but was also filled with remorse. Meanwhile, Rossi received a visit from a woman who could hold a secret from his past. Did you watch last week’s episode? If you missed it we have a full and detailed recap right here for you.

On tonight’s episode as per the CBS synopsis, “when the BAU is called to Salt Lake City Utah to investigate a triple homicide, the search for a connection among the victims could lead them to a fugitive who could have ties to the UnSub.”

Hotch finally told Rossi he and Beth broke up on tonight’s episode of “Criminal Minds”. And apparently the break up is old news. Beth got a job offer in Hong Kong and Hotch realized he didn’t want to be the one holding her back. So he told her to take the job.

However Rossi doesn’t think Hotch is ok about this breakup as much as he wants to appear to be. So he’s forcing Hotch to take part in the dating scene. He told him he wouldn’t push but Hotch did have to act as his wingman.

In the meantime, though, the team got word about a triple homicide in Salt Lake City. A security guard was murdered and later his gun was used to kill a married couple out in the suburbs. The couple were Ron and Karen Myerson. And technically they weren’t even supposed to be home at the time they were murdered.

Ron and Karen had gone to a couples’ retreat (the husband’s gambling debts had begun to wear on them) but then Karen got sick so they returned home early. And that’s when they must have surprised the Unsub.

Not that the UnSub is completely unknown to the team. Once they realized their killer had been looking for something possibly buried before the Myersons had moved in – they realized they were searching for Benton Farland. Benton Farland was recently released from prison two days ago though he had gone in for the rape and murder of his sister Miriam.

Benton was just a kid when he met a woman named Amelia and that was her former house he was looking through. And she had manipulated him into committing those crimes. However Benton served twelve years for what he did and Amelia had escaped persecution by running away.  So it was Benton that was blamed for everything. Though he later somehow convinced his nephew (Miriam’s son) that it wasn’t as bad of a guy as everyone thought. After all he wasn’t the one that had actually murdered Miriam – that was Amelia.

So Benton’s nephew Andy ended up sympathizing with his uncle. He even turn a blind eye to how sick Benton really was.

Though, he eventually woke up to the danger he and his sister Rebecca were in. Benton and Andy had corresponded while he was in prison. Yet the first thing Benton did when he got out was to come and visit them.

Benton had wanted to play happy family but his father hadn’t forgiven him for Miriam’s death. So he tried to attack Benton and Benton killed him for it. After he did that, though, he took his niece and nephew hostage. And then he had Andy help him take down the security guard.

Andy cooperated with his uncle because he didn’t want his sister to get hurt. But when he got the opportunity to escape – he took it. Andy crashed the car they were all in.

Though Benton was able to survive it and seeing as his new friend Andy wasn’t really his friend like he was pretending to be – he shot Andy and kidnapped Rebecca again. He then shot the good Samaritan who had stopped by the car wreck to see if everyone was ok.

Andy got off lucky. He survived the gunshot wound but he didn’t know what his uncle was planning next. And, truthfully, he was scared. His sister Rebecca didn’t know how to handle Benton and he warned the team that she was eventually going to say something that would set him off.

Yet she never got the opportunity to do that. Because unlike what the official reports said, Benton wasn’t manipulated into doing what he did twelve years ago. He was actually the dominate one in his relationship with Amelia. It seems she was frightfully naïve for her age and Benton was the one that had used that to his advantaged.

And as for the stop at his old home, Benton hadn’t go there to make peace. So his father was right all along to attack him. Benton hadn’t come home out of good intentions. He went there to collect his niece Rebecca. Unfortunately, she’s the spitting image of her mother and Benton couldn’t pass up on getting a second chance at Miriam.

So Benton was always going to hurt his niece but like last time he didn’t do want to do it alone. He remembered Amelia’s old hiding spot and that’s where he took Rebecca.

And it was by more chance that the team was able to locate Amelia’s hiding spot not long after the car wreck because once they did they managed to race there before Benton could hurt anyone. Benton was still trying to convince Amelia why it was such a good idea to hurt Rebecca when the BAU busted in.

Benton knew he couldn’t escape so he didn’t bother trying. So he chose to die there in Amelia’s cabin rather than go back to prison.

Amelia will still be held accountability for the part she played in Miriam’s death but there’s a chance she won’t get the full maximum sentence like she was bound to have gotten if she had tried to come clean all those years ago.

As for Andy and Rebecca, they now have lost their mother and their grandfather. Though, thankfully, they still have each other lean on.

Speaking of which, Rossi came through for his friend. Hotch had later followed up on that double date crap Rossi had dragged him into but as it turns out it wasn’t so bad. He even met someone he could have nice chat with.