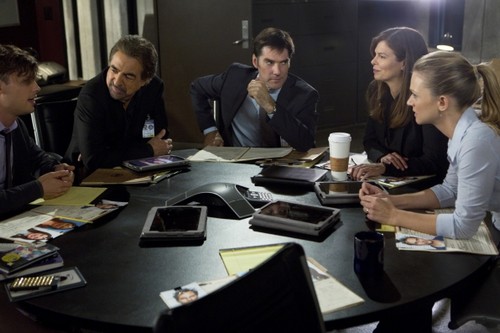 CRIMINAL MINDS returns to CBS tonight for another great episode in the continuing story. In “Blood Relations”,  two murder victims are found in a West Virginia backwoods community. The investigation reveals that the homicides may be linked to a long-simmering feud between two families.

On the last episode, as the BAU wraped up an investigation into unusual stabbings in Upstate New York, Morgan’s visited with one of the crime’s survivors could uncover more questions left for the team to answer.  Morgan was left w/more questions than answers when he questioned a stabbing survivor.  Guest Stars Included Aasha Davis as Survivor Daria Samsen and Emayatzy E. Corinealdi as Her Sister, Ellen Samsen.   Did you watch last week’s episode? If not then we have a full recap for you right here.

On tonight’s episode the BAU investigates a family feud which could be central to a murder investigation in West Virginia.  When two murder victims are found in a backwoods community in West Virginia, the BAU uncovers a long-simmering feud between two families and must investigate which side could be responsible for the deaths.  Series star Matthew Gray Gubler directed the episode. Guest stars include Adrienne Barbeau as Cissy Howard; Tobin Bell as Malachi Lee; and Ronnie Gene Blevins as Miles Lee, all members of the feuding Howard and Lee families.

The Lees and the Howards have been feuding for generations, but no one had expected it would escalate into murder. There have been two murders so far – one smember from each family has died and for all their anger at each other – no one is talking to the BAU unit.

Apparently this is family business and they don’t want outsiders interfering. This modern day version of the Hatfields & McCoys started out over a business disagreement in another time and the recent problems started up again with what the team suspect to be some heated competition with each other in the Meth business.

The team thought if they could get the leaders in one room even for a minute then maybe they could provoke a reaction and they were right in their assessment. The families were just too hot headed to let an insult slide. The Matriarch of the Howard family basically threatened the patriarch of the Lee family while still being in their presence. So the team knew the Howards were going to strike. Which makes them initially believe it was the Howards that targeted one of the Lees’ wife that very same day.

Still, the Howards claim it wasn’t them. Cissy Howard admitted her family was angry, but they would never have attacked a woman that didn’t even doing anything besides raise her kids.

So the team looked further into the meth dealings and raided Malachi Lee’s place expecting to find evidence of a lab and what they found instead was a profitable and legal business for substitute fuel.  It seems neither of the families were involved in meth and they had no need to feel threaten about being in the same market because the fuel business also happens to be profitable for everyone.

That means it’s not someone currently from either family that started the killings. It’s an outsider or someone that had left or was forced to leave the family that re-started this feud. Someone who didn’t want the Howards or the Lees to be selling on up and living the high life.

And now that person has taken Cissy as a hostage! They took her right out of her own home!

The UnSub must hate both families and that made Blake think about the urban legend. There was a myth about someone known as the “Mountain Man”. He was a radical that wanted to lead West Virginia into another secessionist movement. But the real man formerly known as such wasn’t behind the murders.

He was formerly a Howard and yet he changed his name in order to start over. And his aunt Sissy even gave him the idea to do it.

Not a lot is known about Sissy. She married into the Howard family, but there wasn’t any evidence of her before that. Considering the fact that she gave the “Mountain Man” the idea to change his name – it wasn’t hard for the team to pursue the idea that maybe she did the same.

And surprisingly her real name was Magdalena Lee. She was Malachi’s sister and she also happened to be his former lover. Back when they were kids, they fooled around and she had gotten pregnant. Their parents were so embarrassed that threw her out and Malachi followed.

That is until their situation became too much for him and he abandoned his pregnant teenage sister to fend for herself.

She ran into a woman near the place they used as their love shack and the stranger helped her deliver her son. However the baby was malformed and Cissy knew that she couldn’t raise him on her own. So she gave him to the woman that helped her. And years later that baby grew up to resent his parents for shunning him.

That’s why he killed off some of his siblings and it’s why he kidnapped his mother. He wanted to know if she ever regretted giving him up and all he got that from her was that he was her sin and she’s waiting to go to hell for what she’s done.

He wanted to kill her, but the feds were on his trail. So his mother told him to make a run for it seeing as he didn’t deserve to die because of what she and her brother did.

It was Malachi that helped the police figure out where Cissy was. He had told them all about his past with his sister and that allowed the task force to find Cissy in time.

But Blake was attacked during the rescue. Their UnSub grabbed her and tried to drown her. She managed to come up for air and tell her partners to shoot at the water though it’s later shown their culprit escaped. He traveled all the way to Kentucky and is terrorizing whoever he can get his hands on.

His parents on the other hand weren’t so lucky. They were alive, but now they find themselves in the uncomfortable position of having to explain to their families why they were targeted.