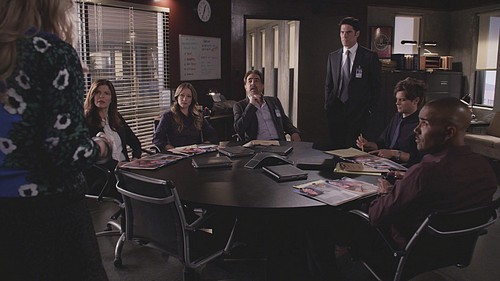 CRIMINAL MINDS returns to CBS tonight for another great episode in the continuing story. In “Fatal,” victims of arsenic poisoning are found in Long Beach. The investigation reveals that the killer has a fascination with Greek mythology, based on handwritten death threats to the deceased and other mysterious clues. Meanwhile, Hotch becomes concerned about participating in Jack’s third-grade career day.

On last week’s episode a series of targeted kidnappings near Memphis had the BAU searching for a commonality between the missing persons and a motive to lead to the UnSub. Meanwhile, Savannah vented her frustration to Morgan about the amount of traveling he has done for his job.  Did you watch the last episode?  If you missed it we have a full and detailed recap, right here for you.

On tonight’s episode when victims are found dead from arsenic poisoning in Long Beach, Calif., handwritten death threats and other clues have the BAU looking for an UnSub fascinated with Greek mythology.  Bruce Baumgartner guest stars as shipyard worker Bill Harding.

An UnSub with particular sick sense of humor is killing people with arsenic. First he writes each victim a letter telling them they have less than a day to live and then somehow he manages to find them wherever they are or in one case wherever they’re hiding – and kills them.

The case came to the BAU unit after a man claiming someone was trying to kill him asked for protective custody. When even the police refused to believe him he then chose to get arrested in order to stay safe in lock up. Yet the UnSub still managed to kill him in the middle of a police station.

BAU were reviewing his case when the UnSub struck again. So they started to look into similar situations for a possible link concerning all of them because their killer is becoming brazen. Before he would have waited a while in between kills and now he’s going by days. Also he blatantly left a calling card on his last victim – he left behind a piece of twine.

Thus far the two earlier victims each suffered from one form of addiction. And so the team considered the killer wanting punishing his victims. But the last victim didn’t suffer from any affliction. He was actually a church-going man.

Reid was able to find one link though that managed to connect all three victims. They all lived the exact same distance from each other. Although the team is also wondering why the UnSub feels the need to have personal contact with each of his victims. During investigation the same suspect keeps cropping up.

Witnesses notices the victims interacting with a heavy set man in his early forties. That man otherwise known as the killer, Bill, is retiring and he should be heading to his dream vacation spot – Greece – but he’s angry. So angry at life or at the voices in his head that he’s continuing to target people for no good reason.

His newest victim called 911 when she got the note. She thought it was a couple of kids trying to mess with her. However the operator on the other end knew what the letter meant. So she pulled in Rossi to talk to a very scared Janice.

He told her to lock up everything and to make sure she didn’t touch any food or beverage. But Bill was watching her all along and when he saw her throw away the wine – he chose to kill her differently than the others.

Rossi heard Janice’s death over the phone. The UnSub went to the extreme with her because he was denied the interaction he craves. He never got to talk to her or get the chance to watch her swallow the arsenic. This infuriated him so much that Bill stabbed her multiple times. Then he wrapped another piece of twine around her neck as if she was gift-wrapped.

Her twine was different than the others they eventually found on each of his victim. Each piece of twine represented the years the victim had lived. And that’s how Reid was able to determine what the UnSub was doing.

In Greek Mythology there were these three “hags” known as the Fates and they would decide who died and when. They did this by cutting the person’s life line. Which is what the UnSub is desperately trying to re-create. He was supposed to have gone to Greece 20 years ago when he missed his chance. And even though he can now afford to go and enjoy himself – he instead wants to take out his 20 year frustration on people he randomly picked one day. Why? Because he’s dying.

He picked them when they all stood on line at a café shop. He was at the hospital across the street and when he returned to his car – he stayed sitting in the parking lot to enjoy the view which was of his victims leaving the café shop. He was angry at them for making plans and being happy when he wasn’t.

But Bill has only killed the four out of the five intended targets. So there’s one more victim out there. Though it’s not who the BAU were suspecting. They thought it was the woman that also frequented the café that day the others did. And they were half-right! Bill did originally target her. Yet he shifted the focus off of her to his former boss and friend.

He found out that his “friend” made sure he didn’t go to Greece all those years ago. The friend said he thought it was reckless of Bill to give up a good job and go to a foreign country with no money. So he sabotaged him.

In all honesty he had a point. Bill would have missed out on being there for his sick mother and he would have been lost in a foreign country by himself. The friend only admitted to all of this because he knows that Bill can still go to Greece. This time with a pension and insurance – another thing he would have lacked years ago. But Bill wasn’t appreciative. He just was homicidal!

He got his cancer from working at the shipyard and it’s likely he’ll die before he ever gets to see all of Greece that he wants. And the trip was Bill’s lifelong dream. When he was younger he got lost in the forest with a friend of his. The friend never made it out yet he managed to survive.

Afterwards a teacher gave him a book on Greek mythology. Inside of the book there was a story about young hero escaping what looked like the exact same forest he escaped. So that’s why Bill has been obsessed with this vacation and with the mythological allure.

Going to Greece was going to be his second chance and in his mind the friend ruined it for him.

He poisoned his friend and that unfortunate man would have died for nothing if the BAU hadn’t showed up in time. It seems the friend had done him a favor – the shuttle bus that Bill missed (the one that was going to take him to his flight) crashed on the way to the airport. If Bill had been on it 20 years ago then he would have died along with everyone else. So all of this really was nothing. Bill was angry for no reason!

When the team returned home – Hotch hosted his son’s class at the office. Jack had asked him to show off what he does for living and Hotch was apprehensive. His job is to put away bad guys and sometimes they don’t get the job done in time. Such was the case with Jack’s mother.

Though no one mentioned that part during the class visit. It was a good trip and Hotch got to make the kids laugh. He also inspired young girl into becoming profiler like him. She was able to deduce that her teacher had a crush on him which was just awkward for the teacher.

Yet, all he was trying to do was make Jack proud of him and he accomplished that by merely being himself.