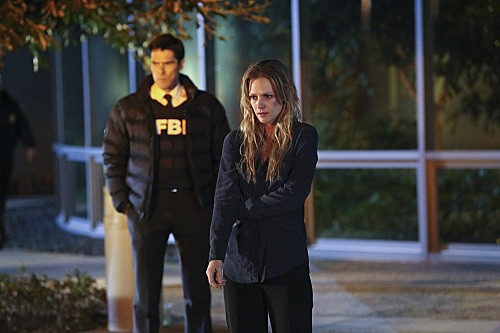 CRIMINAL MINDS returns to CBS tonight for another great episode in the continuing story. In “What Happens in Mecklinburg…,” the BAU investigates a series of kidnappings near Memphis. Meanwhile, Savannah vents her frustration to Morgan about the amount of traveling he is doing for his job.

On last week’s episode the BAU investigated a family feud which could be central to a murder investigation in West Virginia.  When two murder victims were found in a backwoods community in West Virginia, the BAU uncovered a long-simmering feud between two families and must investigate which side could be responsible for the deaths.  Series star Matthew Gray Gubler directed the episode. Guest stars include Adrienne Barbeau as Cissy Howard; Tobin Bell as Malachi Lee; and Ronnie Gene Blevins as Miles Lee, all members of the feuding Howard and Lee families.

On tonight’s episode a series of targeted kidnappings near Memphis have the BAU searching for a commonality between the missing persons and a motive to lead to the UnSub. Meanwhile, Savannah vents her frustration to Morgan about the amount of traveling he does for his job.

A new case in Memphis has re-opened old wounds for Morgan. After hearing her boyfriend was going to miss yet another dinner with her parents – Savannah got upset. But Morgan had already spoken to her about this and since traveling for his job is unavoidable he’s wondering if maybe they would be better off is they just break up from now.

The case in Memphis is tied to other cases across the state. Their Unsub has taken at least two other victims prior to this however this last time the Unsub attacked two women at once. Which was quite risky and gives evidence that he culprit is acting on a plan.

Especially seeing as one of the women ended up getting left behind while her friend still managed to get kidnapped. The survivor, Debbie, told the BAU what she could about the kidnapper but all she had was that he was wearing a pig mask and that he had used a stun gun on her. So she really didn’t have that much to share.

Although the inclusion of the stun gun basically tells its own story. For the Unsub to use it must mean they couldn’t subdue the victims on their own. Now that could mean the kidnapper was too weak or that it’s possible a female culprit the team is looking for.

So far the earlier victims that were also taken haven’t been found yet. This has the team believing that their Unsub is possible holding onto the victims because of a long term plan. And they were right in that regard, but they had the wrong reason.

There was a connection between all the victims – they were all involved with a fraternity party (that’s where the pig masks come in). Still the only thing on file about that particular party was when a pledge student drunkenly fell off the roof and died, but that isn’t why the Unsub started to take people right of the street.

In scenes of the Unsub with the victims, it’s revealed these people are being held for answers in another incident that occurred at the same party. The Unsub is torturing them and once they’ve given her everything they know; she then finds new way to hurt them prior to dumping the body.

Luckily the first person she dumped was found very soon afterwards. He’ll never be the same since the Unsub forced acid down his throat and sodomized him with a foreign object. Though he’ll still be in better condition than what he himself did to his own victim.

Michael is his name and he was tortured liked that because of what he did to a girl named Lauren. The BAU team found an old fraternity brother of his who recalls seeing Michael and Lauren going into the basement together long after Michael had told two of his other frat brothers to meet him there. Later the same girl was admitted to the hospital for injuries.

Lauren never did recover from those injuries and she was put on life support. And recently her big sister, guardian, and only living relative had to sign the papers to take her off.

So no wonder it’s the sister that’s doing all of this. Sheila received a call that night from her sister. All Lauren managed to say before she succumbed to alcohol poisoning was the names of the people that hurt her and that she was sorry.

The fraternity brothers had raped her and then they made her drink a whole bottle of alcohol. They did this so that she wouldn’t remember what happened to her, but she had gotten so sick from it that it eventually ended with her death.

That’s why Sheila kidnapped two of the rapists, the Alumni booster that covered it up, and the girl that took her sister to the party. She wanted justice and the police wouldn’t believe her enough to investigate on their own.

The team found her just before she could hurt Christy and that’s mainly due to younger woman stalling her would be killer. She pleaded that she didn’t know the guys would hurt Lauren. And that she only left the party when she couldn’t find her.

Those few minutes bought her enough time for the team to arrive and talk down a crazed blood thirsty Sheila. What really got to their killer though was the promise the BAU made to her – they said there would finally be justice for what happened to Lauren. Already they have the third fraternity brother in custody and the have the doctor that changed Lauren’s file under his friend’s orders. So the fraternity won’t be able to keep covering up the rape and murder.

And that’s all Sheila wanted. She merely wanted her sister’s story to be heard.

Morgan realized with this latest case that he didn’t want to keep pushing people away. Like JJ told him – he was going to end up alone if he kept doing it and that’s why on his return home – he made it up to Savannah.