BY Heather DiPietro on May 14, 2014 | Comments: one comment
Related : Criminal Minds, Recap, Television 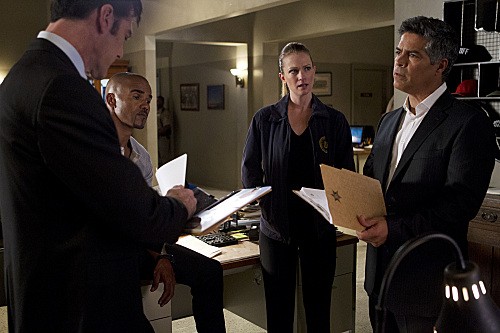 CRIMINAL MINDS returns to CBS tonight for another great episode. In “Demon,” Part 2 of 2 the conclusion Season 9 ends with the BAU continuing to investigate the murders of prostitutes in Texas and uncovering a deep web of corruption that could be the motive behind the killings. Meanwhile, one team member faces a sad secret from the past; and Garcia is forced into action to save a colleague.

On last week’s episode when the BAU was called to Texas to consult on the murders of prostitutes, evidence pointed to killings with religious overtones. But as they delved further into the investigation, the team put their lives at risk.  sai Morales Returned as BAU Section Chief Mateo Cruz.  Guest Stars Included Michael Trucco as Owen McGregor and Brett Cullen as Preacher Mills.  Did you watch last week’s episode?  If you missed it we have a full and detailed recap, right here for you.

On tonight’s episode the BAU continues its murder investigation in Texas, and clues uncover a deep web of corruption that could be the motive for the killings. Meanwhile, as one team member’s life hangs in the balance, another concerned BAU member must face a sad secret from the past, and Garcia is thrust into action to save a colleague, on the conclusion of the two-part ninth season finale

On tonight’s episode, the BAU continues its murder investigation in Texas, and clues uncover a deep web of corruption that could be the motive for the killings. Meanwhile, as one team member’s life hangs in the balance, another concerned BAU member must face a sad secret from the past, and Garcia is thrust into action to save a colleague.

Tonight’s episode is the second and last part if the show’s season finale. We left off at the restaurant after the horrible shootout brought on by Preacher Mills. We pick up tonight right where we left off as tonight’s episode starts with the eerie scene of a floor of dead bodies. Reid is near death on the floor as the shootout continues and calls for help can barely be heard.

Derek gets hurt after a shooter sneaks up behind him and takes a shot. Derek returns fire and kills. AJ cleans up at the hospital as she waits to find out how Reid is doing. JJ and Alex talk about his status as Penelope arrives. JJ goes to check in on Derek who is in another room at the hospital. While in Derek’s room, the team talks about possible scenarios. Derek believes there was a shooter there before the preacher. They believe the preacher was set up. They discuss Travis’ role and the fact that every victim is connected to the pool hall.

Owen takes Dinah hostage despite her pleas not to. She promises she won’t tell anyone about anything, but he takes her anyway and drives off. JJ and Rossi show up at her place and see that she was packing when she must have been taken. They find a picture of a child in her bag. JJ gets a call to let her know that Reid is in recovery and is okay. She is very relieved.

Back at the sheriff’s station, JJ and Rossi are told that Dinah was taken in by deputy McGregor after being caught trying to leave town, and resisting arrest. Rossi wants to talk to McGregor but his request falls on deaf ears. Meanwhile, JJ begins questioning Dinah and tells her that she may take the rap for everything if she doesn’t start talking. She encourages her to talk and asks her if she was a prostitute before too. JJ tells her she doesn’t think she did anything intentionally to hurt anyone. Just then, the same sheriff who dismissed Rossi’s request to speak to McGregor walks in and says that he needs to take Dinah and that the questioning should be over with as she was simply arrested for resisting arrest. It seemed like Dinah was ready to talk right until he walked in and she clammed up. JJ shared this with the team and they begin to suspect that some or all of the force may be in on this.

Penelope and Alex sit by Reid’s side into the night hours. When he wakes up, Penelope begins to play nurse as they tell Alex to leave. Penelope tells JJ that she found Dinah’s mom, who happens to have a first grader enrolled in school. They know that the young boy must be Dinah’s son—the one from the picture.

At the police station, the team begins to unravel more of the corruption. Hotch tells Derek that they need to find McGregor. He tells JJ to go speak to Dinah. JJ goes in to talk to Dinah and shows her a note with her son’s name on it. She confirms with her eyes that that is her son. As JJ walks out, she is met by yet another nosy officer.

Owen then walks into the hospital in a sheriff’s uniform. Derek finds out he is there and calls Penelope just as she sees him. He tells her to rush back to Reid’s room while Owen is at the nurse’s station. Derek is instructing Penelope on what to do now. He tells her where there is a gun in Reid’s room and she needs to get it. She is incredibly nervous, but knows her choices are limited.

Penelope is able to sneak out with Reid in a wheel chair. She presses an alarm as a distraction. Own turns immediately trying to grab them before they can get out. Meanwhile, Alex and Rossi are driving when they get pulled over by the crooked sheriff’s that they keep encountering at the station and both get their guns ready as they have a bad feeling these two may be scared enough of getting caught, that they are willing to shoot them.

Owen pulls up to the scene and one officer is on the ground while the other is treating her wounds. They begin to explain that they tries to get the agents but they got away. Owen shoots them both and takes off.

Alex and Rossi get Josh, Dinah’s son and take a picture to send to JJ. JJ again meets with Dinah who now agrees to fully cooperate if she will just get her out of there. JJ promises to help and leads her out by the arm. She is stopped once again by a meddling deputy but JJ isn’t having it and tells him to take his hands off of her. Just then Hotch comes in and reminds him that he’d be arrested for obstructing a federal investigation. He lets go and JJ and Dinah take off.

Back at the hospital, Penelope tells Derek that they are in the clear and she and Reid are headed back in. They get to the room and a nurse comes in to give Reid his meds. Thankfully Penelope caught on and told him that Redi already has his meds. The nurse tells her it is something different, but she responds that he has had everything already. Reid can tell that something is wrong when he sees the meds. The nurse persists and starts putting the meds into the IV. Reid keeps yelling at him to stop and when he knocks the needle out of his hand and the nurse bends to pick it up, Reid sees he has a gun and yells, “Garcia, the gun,” signaling her to grab his gun. She does and she and the nurse draw their guns at the same moment and a shot rings out, but the scene ends without letting us know who was shot. Derek arrives and sees Penelope hugging Reid. Thankfully our girl was okay.

Hotch and JJ have Dinah alone in the car and she is giving up all the details on the preacher. JJ calls Derek and tells him they are heading to the junk yard where Dinah tells them they can find McGregor. It is very dark, with little light. JJ has her gun drawn and sees a truck driving up. She shoots at it when they won’t stop. Finally, after several rounds, the truck stops. Owen can now be seen there as well and is fighting Hotch with fists and guns. Derek is there as well and they all circle around Owen, who has been shot. Just then police cars are beginning to roll up.

The team is flying home when Hotch notices that Alex seems preoccupied. She brings Reid home and drops him off. Reid can tell something is on her mind as well and asks what is wrong. She tells him that seeing him in that condition hurt her even more because it reminded her of her son who passed at 9 from a medical condition. Reid reminds her of who her son would have been at his age. Reid is touched by their conversation as Alex walks out. He watches her hail a cab and drive off into the night from his window.