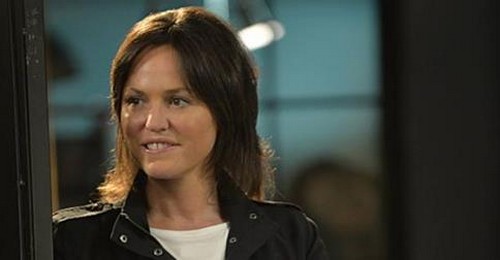 Tonight on CBS CSI: Crime Scene Investigation returns with an all new Sunday November 16, season 15 episode 6 called, “The Twin Paradox.” Tonight, CBS will be airing the episode they preempted last week and on the episode evidence indicates that the Gig Harbor killer is responsible for yet another death.

The Gig Harbor Killer has struck again on tonight’s episode of CSI. And this time, he or they are changing up the MO. The killer have progressed beyond just criminal analyzing the scene of his own crimes. Now he’s profiling themselves as well.

The team was called to the scene when a 911 distress call made it seem like the Gig Harbor Killer was in the middle of his “work” and was inviting the police to come and stop him. But after, Nick and Sara arrived on the scene, they soon saw the 911 call was a hoax.

The killer merely wanted to show off his work although he doesn’t appear to be ready to be caught just yet. In fact the crime scene itself was several days old. The blood everywhere had even dried up. Meaning the latest victim, most likely another blonde student who was secretly moonlighting in the sex trade, is probably dead by now.

However the killer had exposed too much about himself. Paul Winthrop was always a suspect but the recording he had left behind to profile the killer was later analyzed. Sara had overheard something odd in the background and when she took a closer look – it revealed there was two people in the room with the victim. So Paul ended up showing his hand a bit.

His twin brother is still locked up in Seattle. Hence no one would suspect poor Jared. And the reason Jared is referred to that way is because if Paul can so easily replace him in his killing spree – Paul might have been the aggressor all along.

The therapist Paul had hired for his brother in the new upcoming trial has a recording of Jared during one of their sessions. In it, Jared does come off as mentally unstable. Anat first Russell assumed it was all part of Jared’s act. That Jared was making himself appear that way just so he can get off for murder. But what if Jared really is the pawn and his brother is the true manipulator?

Paul said he hadn’t known he’d even had brother until after he saw Jared on the news. So Finlay checked into that theory and though nothing is definitive – it does look like Paul had the chance to get into touch with his twin prior to the original Gig Harbor murders.

The twins were adopted out. Their mother was a young woman in trouble who was lucky enough to have had her babies at a convent where the nuns could look after her. Back in those days, children were given out to homes that were deemed respectable. Yet Jared wound up going to an abusive where his adopted father used to attack both him and his adopted mother. Meanwhile, Paul was recorded as having died as a baby. There was even a grave for him at the convent’s graveyard for other children that died at birth.

Finlay and the Seattle detective that came looking for his former partner Carrie, Dan, had exhumed Paul’s grave and what they found inside was a doll.

There was a picture of the twins’ mother inside of the doll and there was also some hairs that might have come from her. But the mystery remains. Someone had gone to great lengths to make it appear Paul died when he hadn’t.

And the unsubstantiated proof Finlay had found that might mean Paul knew about his brother a good year before he claims – is that the nun running the convent had kept a book on visitors. She recorded a young man coming to ask her about the twins though she never got his name.
Oh, if only she had!

The team is now aware of how manipulative Paul can be but the few pieces of evidence they have isn’t completing their narrative like it usually does. The missing Seattle detective finally showed up and she shocked everyone by still be alive.

She had escaped her captors and while she can identify meeting Paul prior to her disappearance – she doesn’t remember much about what happened next. Though the few tidbits she had helped the team identify where she was taken. It was an old hotel that’s been closed down for years for renovation but the renovation simply never happened.

Finlay and Greg were part of the task force that stormed the building. However no one else was around when the dup found a victim locked up in the closet. The guys tried to help her but the victim was so emotionally broken – she didn’t believe them when they said they were going to help.

She attacked Greg and stole his gun. She was going to use it too if Finlay hadn’t chosen to stop her. Finlay shot and kill that woman. And it’s been haunting Greg ever since. He keeps thinking about what ifs and Sara told him that wouldn’t do him any good.

Because Finlay discharged her weapon – she was expecting she’d be put on leave. But something strange happened when the team ran the recent victim’s DNA. It came up as if she was the Gig Harbor Killer. The victim was born a man and had gone through sex change.

So the foreign DNA found on some of the victims makes it seem like the woman Finlay killed was actually a killer. Although Finlay and Russell know differently. Paul had set that woman up. And no one believes he’s done with killing people.

Though he might have a new person to blame if it ever comes to it. Paul and Dan were seen talking to each other in some back alley. And now you tell me – why would cop meet with a suspected serial killer as if they know each other?

Would it have something to do with when Dan visited his former partner in the hospital and she freaked out upon seeing?