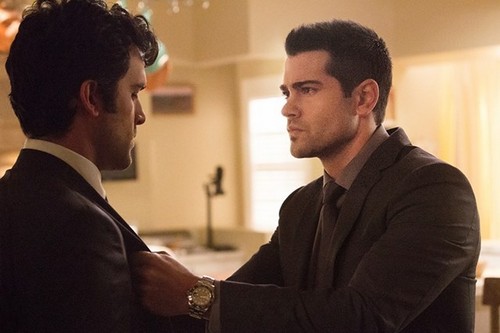 Tonight on TNT Dallas returns with an all new Monday September 15, Season 13 episode 13 called, “Boxed In.”  On tonight’s episode Bobby tries to save lives in the wake of a family kidnapping; John Ross and Pamela come to a cautious agreement; Elena spirals downward after discovering a truth about Nicolas; Christopher fears for Elena’s safety; and Bobby must make a choice.

On last week’s episode as Ewing Global went public, twists and turns abound while everyone scrambled to claim ownership. Pamela struggled with what to do now that she knew Cliff didn’t really kill J.R., and Bobby sought the aide of an old flame Tracey McKay to help get back control of the company. Meanwhile, Judith and Ryland worked to fix their own problems with the cartel, which ended up putting lives in the balance and aligning the Rylands and Ewings in a way no one ever expected.  Did you watch last week’s episode?  If you missed it we have a full and detailed recap, right here for you.

On tonight’s episode In the wake of a devastating family kidnapping, Bobby puts everything on the line to save lives. John Ross and Pamela form a truce of sorts. Elena, who’s been in hiding with Nicolas, finally learns the truth about his connections to the cartel, which sends her spiraling. Christopher desperately searches for Elena, fearing for her safety. And Bobby is forced to make a choice he never anticipated.

Tonight’s new episode is going to be great. You’re not going to want to miss a minute of the action and we’ll be recapping it live for you as well. While you’re waiting for “Boxed In” to begin hit up the comments and tell us what you think of the second half of season 3 so far!

Do you know who is in Mexico? Ann and Emma are currently down there but they didn’t take the trip as part of their vacation. They were kidnapped because someone wanted to get Judith attention. And he accomplished that! You see Luis knows how much Judith cares about her granddaughter and from the phone calls alone – Judith is already cracking under the pressure. She’s just so worried about her family that she’s willing to do anything he asks of her.

Ironically, Bobby and Christopher was just going to ask Harris for his help in dealing with the Cartel when they found out about the girls. So in the end they still got to talk to the CIA but the American organization ultimately proved to be of no help. They can’t provide protection for the Ewings and by time they get to Treviño it could be too late for Ann and Emma.

Treviño is selling Ewing stock at low prices. That means he can get the cartel their money all the quicker and once Luiz has his money – he’s not going to want hostages weighing him down as he makes his getaway on some remote and tax free island. So John Ross wants to do something now!

He knows his family needs to act in the moment and because of the people he’s going to need for the rest of his plan (the kind of people he’s burned) – he asked Pamela for her help. She was greedy enough to stick around and wait until he got his money back before leaving him but there is still some goodness to be found in her. Once she found out Ann was in danger then she prepared to do whatever she can to retrieve Ann – Emma not so much.

And as for Christopher, he isn’t waiting around for the axe to fall either. He went to Treviño’s place hoping to speak with the other man and instead what he found was a house occupied only by Treviño’s family. It seems the man left his wife and children behind in order to run away into the sunset with Elena!

Not that Elena is all that forgiving when she found out how Joaquin abused her trust.

Treviño at first tried to explain away his actions to Elena. He had owed a debt to the cartel and as you know – there wasn’t any other way to get out of repayment. Yet none of that mattered to Elena. The boy she used to know grew up and used her. Then when his wife called during his excuses she had to listen to him deny her very presence. So there is no justifiable way to make things right with her.

Or with his wife for that matter because the Mrs. track him down to his little love shack with Elena. She was clearing out the house and was about to go on the run when she had someone spy on her husband. So before she high-tailed it out of town – she gave Christopher the information he needed to trace the bastard down.

Ann and Emma are in danger and seeing as Judith’s payment was late – Luis almost killed Emma. Truthfully he just wanted to scare the other woman into not messing up his shipment but it’s clear that given the option – he’d kill Emma before he would harm Ann. Luis has a sick fascination with wanting to impress Ann. Almost as if he was courting her while holding her hostage.

He told her earlier that her ex Harris never deserved someone like her. And then later he tried to woo Ann over an intimate dinner.

Luckily Bobby interrupted their dinner in time. He flew down to Mexico and offered Luis a new deal. He was willing to help the cartel (even with the risks to himself) if he could only have his wife and step-daughter back. Originally Luis didn’t want to give up any of the hostages seeing as he knew the importance of leverage, but he liked the deal Bobby was willing to make so he adjusted his terms accordingly.

Now Luis is prepared to let one hostage go and Bobby has to be the one to make the decision!

However help could very well be on its way. John Ross and Pamela were able to convince Nasir Ali to fund them in undermining the cartel. And if John Ross’s plan does end up working – he could soon have the better leverage in re-discussing the hostage situation.