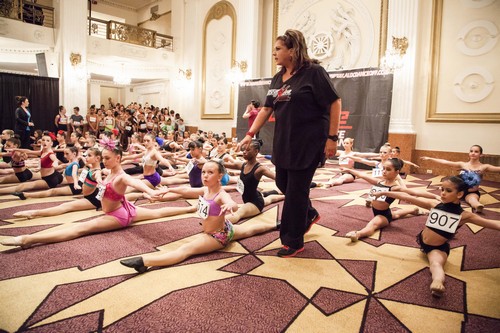 Tonight on lifetime Dance Moms continues with a new episode called, “Girl Talk.” On tonight’s episode, the dancers speak their minds on everything, including Abby, their teammates and their fighting moms.

On last week’s episode, after a season full of fights, losses, and heartbreak, Abby and the moms gathered to discuss the most memorable moments of the past year. Abby discussed the pain of losing her mother, while Kelly’s expulsion from the team was still fresh in Christi’s mind. Soon, old wounds were re-opened and everyone was “seeing red.” Did you watch last week’s episode?  If you missed it we have a full and detailed recap, right here for you.

On tonight’s episode their moms have had the floor to air their feuds, frustrations and alliances; now, for the first time ever, it’s the girls’ turn to dish the dirt. With guest appearances from Asia Ray and Vivi, the dancers speak their mind on everything from Abby to their former teammates, the moms fighting, and everything in between… and there are no moms allowed!

Tonight’s episode is going to be another drama packed evening, which you won’t want to miss. So be sure to tune in for our live coverage of Lifetime’s Dance Mom’s Season 4 Episode 18 – tonight at 9 PM EST! While you wait for our recap, hit the comments and let us know how excited you are about the new season of Dance Moms tonight.

Tonight’s special edition of Dance Moms: Girl Talk features Abby’s dancers discussing how they feel about each other and Abby Lee. Fans at home have tweeted in questions for the dancers, and they will be answering them in a no holds bar tell all.

Fan Question: Are Chloe and Maddie more like friends or rivals?

Chloe: “Obviously we are best friends, but it’s kind of hard because we are always competing against each other.”

Maddie: “One day we are best friends and the next day we have to focus and get in our zone.”

Chloe: “I mean we’ve been best friends since we were four.”

Fan Question: Chloe what’s it like knowing that Maddie is Abby’s favorite?

Chloe: “I mean sometime I wish I knew what it was like to experience being Abby’s favorite, but I’m who I am today because I’m not the favorite all of the time and I have learned to accept that.”

Fan Question: Maddie, have you ever been yelled at by Miss Abby?

Maddie: “Sometimes it’s hard being Abby’s favorite, because sometimes there is so much pressure on me. I have to work so hard, I feel bad half the time.”

Chloe: “I remember when you had to beg Abby to let you dance because she said you didn’t have the passion.”

Maddie: “I’m at the studio every second, minute, hour of every day and I used to beg to have a solo because she thought I didn’t have the passion. I used to cry every night and be like ‘she doesn’t like me.’”

Nia: “Yeah but it was three weeks without a solo, Nia had to go an entire season with just three solos.”

Maddie: “Yeah I used to tell my Mom now I know how it feels to be Nia.”

Fan Question: Maddie, how did you feel when your music stopped playing on stage?

Maddie: “Half way through the dance my music started skipping but I kept going because it would be weird if I stopped. Obviously I didn’t want to get in trouble with Abby and it’s kind of unprofessional.”

Maddie: “I loved it so much because we got to play two different parts, and you were evil which you like to be.”

Maddie: “Well yeah you killed me.”

Nia: “It was my favorite duet that you guys have ever done.”

Chloe: “It was just a really nice way to dance with my best friend.”

Fan Question: Payton, why do you think Abby keeps kicking you off the team, only to bring you back again?

Payton: “I think that she brings me on since I am older than you guys so I can tell more stories than you have. And some of the parts in the dances are bolder, like a drag queen or something.

Chloe: “Honestly, I was confused I was like what’s going on.”

Payton: “I think that Abby secretly wants to be a drag queen.”

Nia: “My favorite part was when Shangela came in and made a big scene. She taught me a good lesson, to be yourself and be fierce.”

Payton: “I feel like you gained your confidence after that.”

Fan Question: Which one of the girls haven’t been injured?

Peyton: “I feel like everyone has had an injury.”

Payton: “I snapped my fingers when I did the huntress with you guys. I snapped my ankle backstage before one of my favorite numbers.”

Fan Question: Payton do you think it was fair you got kicked off the team after breaking your ankle?

Payton: “Someone had to go back and tell Abby that I was goofing off. I know that wasn’t true and you know it wasn’t true, and that’s why my Mom got so mad and we were kicked off again.”

Nia: “Just saying, if you were goofing off you’re just being a kid.”

Payton: “Kendall was the one in the chair I tripped over, just saying.”

Fan Question: Are Mackenzie and Asia actually friends or enemies?

Asia: “The battle is only on the stage, we leave it there.”

Fan Question: Asia, what was your favorite dance?

Asia: “I loved all my solos on the show, I mean the competition team. I’ve always wanted to say that.”

Chloe: “Do you have an off button?”

Mackenzie: “My favorite was your robot one.”

Asia: “You could probably be Katy Perry in two years.”

Mackenzie: “They just finished editing my music video, so here is the world premiere of ‘Girl Party.’”

Fan Question: What’s one of your favorite onstage moments with Paige?

Nia: “Paige was a true star in the Last Text.”

Chloe: “She was an important part of making sure the audience got what was going on.”

Maddie: “She made the act pretty much.”

Fan Question: Is it hard having Brooke and Paige not on the team anymore?

Chloe: “It’s just really weird because now that they are gone, I can’t have my double wedding with Paige, we planned to have out same dress and be neighbors when we grew up. We were supposed to be with each other forever.”

Maddie: “Even though they’re not with us right now, they’re still part of a team.”

Nia: “I’m just happy that they were a part of our lives.”

Fan Question: Are the Moms as crazy as they act on TV?

Chloe: “I think we can all agree our Moms are a little bit crazy.”

Kendall: “My Mom, she just tries to be a teenager, but it doesn’t work as well.”

Fan Question: Kendall, were you surprised when you got to be on the magazine cover?

Kendall: “I just was thinking to myself I’m not going to get this. I thought maybe Nia was going to get it, because I got way less pictures taken than the rest of you because Abby was rushing me.”

Maddie: “Even though everyone was sad we didn’t get it, we were really happy for you.”

Fan Question: Kendall, what was your all-time favorite dance?

Kendall: “I liked my duet with Maddie, that was my favorite dance of all dances.”

Chloe: “I thought you guys looked great on stage together, you were so in sync with each other.”

Fan Question: Chloe, what’s your personal favorite solo that you have done?

Chloe: “I like my solo Dreaming On A Star, and I also loved it because the music was magical and it helped me tell a story.”

Maddie: “We want to achieve our goals and in order to do that we have to train 24/7”

Kendall: “I train so much I hardly get to see my own family, so you guys are my family.”

Fan Question: Vivianne what’s it like to have your dance teacher also be your Mom (Cathy)?

Vivianne: “It’s fun and I get to be with her a lot because I dance a lot and she teaches me a lot.”

Maddie: “Do you ever get annoyed when you’re at the studio together?”

Fan Question: What has been the highlight of your life so far?

Vivianne: “Being with my Mom when she teaches me.”

Maddie: “Mine was probably winning nationals.”

Chloe: “ Mine has probably been when I got the opportunity to play in the music video.”

The young stars of Dance Moms sit down without their Moms and without Abby Lee to answer fan questions and dish on their favorite and least favorite moments on the reality series.  They also discuss losing their teammates Brooke and Paige after their Mom’s falling out with Abby Lee, among other dramatic events that have occurred this season.