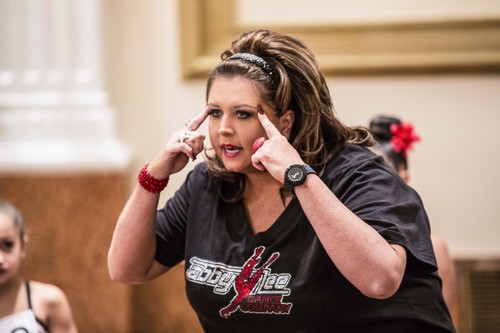 Tonight on lifetime Dance Moms continues with a new episode called, “Kiss or Get Off the Pot.” On tonight’s episode, the Elite Team competes against the Candy Apples; Abby recruits Candy Apple Gino to dance a duet with Maddie where the choreography calls for her very first kiss.

On the last episode of Dance Moms Abby kicked off the second part of season 4 by bringing back her winning Select Team to compete against her original Elite Team in a rematch in Wheeling, W.V., where Mackenzie was given a solo. Meanwhile, the original dance moms grew furious that Abby was once again favoring her new team. Did you watch the last episode of Dance Moms? If you missed it, we recapped it right here for you.

On tonight’s episode with the Select Team gone for the week, the Elite Team needs to end their losing streak. This will prove difficult because they are competing against the Candy Apples on their home turf and Cathy will do whatever it takes to ensure a win. Inspired from her time as a judge on Dancing with the Stars, Abby recruits former Candy Apple Gino to dance a duet with Maddie where the choreography calls for her very first kiss.

Tonight’s episode is going to be another drama packed evening, which you won’t want to miss. So be sure to tune in for our live coverage of Lifetime’s Dance Mom’s Season 4 Episode 22 – tonight at 9 PM EST! While you wait for our recap, hit the comments and let us know how excited you are about the new season of Dance Moms tonight!

In tonight’s episode of Dance Moms the Elite Team attempts to end its losing streak in a competition against the Candy Apples and Abby recruits a former Candy Apple to dance a duet with Maddie.

Tonight Dance Moms begins at the studio where Abby calls in the losing team, the Elite team, into the walk of shame. She announces that Sarah and her mother Christy are there and tells them they are a guest this week and need to appreciate. She then talks to the Elite team about losing again to the Select team. She says she was disappointed in their attitude after the competition and not in their performance. The moms disagree and says that the girl were sad about how Abby treated them and not about losing. Abby doesn’t care and says it was shameful that they behaved that way in public.

Abby goes to the pyramid where Chloe, Maddie, Nia, Mckenzie and Kendall are on the bottom. She reveals that Sarah is on top because of her winning group number which some of the moms also disagree with. She tells them they will be traveling to a competition in Cleveland Ohio where they will do a group routine called “Broken Dolls.” Abby says they are her dolls and they’re broken and everyone sees it. She says there will also be a duet called “That girl has gotta be kissed.” She tells Maddie she will be the female lead in the duo and the lead male will be Gino who is in Pittsburgh who will be arriving later. She dismisses the moms who go to the front to discuss Abby’s decision.

Abby stays in the studio to work with the girls on the new routine which is contemporary ballet routing. Meanwhile the moms says they don’t like that Abby called the girls sore losers and that the girls jus finally woke up and realized that Abby favors the new Select team. Christy, Sarah’s mom, says she doesn’t agree with them and says the girls were sore losers. The moms call her “Christ-y” and says she doesn’t know what she’s talking about.

At the Candy Apples studio, Cathy introduces guest choreographer John who has also worked with Abby. Cathy predicts that Abby will be pissed that she’s now working with John. She also brings in 2 dancers Evan and Allyssa to do a ballroom duet because she knows Abby will also do a ballroom duo because she recently appeared as a guest judge on Dancing With the Stars. Back at Abby’s studio Gino comes in and Abby introduces him to the girls. Christy isn’t happy to see Gino and says it’s Sarah’s week to shine. Gino used to attend Cathy’s studio at Candy Apples and Abby knows it will get under her skin.

The girls continue to practice their Broken Dolls routine and Sarah is having a hard time with the routine. The mothers think that Sarah isn’t right for the routine and that they need an older more mature girl like jade. Abby goes in to see the mothers about how the girls reacted at the last competition. The mothers tell Abby that Sarah can’t carry the routine and Abby agrees causing Christy to go off on the other mothers and she throws them under the bus in front of Abby. The Candy Apples decide to go with a mature routine to beat Abby in the duet. Maddie and Gino practice and Abby is helping to tie up the loose ends. She tells them this whole concept was  inspired by her appearance on DWTS. She knows that the duo is a new concept for Maddie but doesn’t hesitate to drop the bomb that she has to kiss Gino in the routine. Maddie isn’t thrilled about kissing a boy for the first time in a routine. The moms see who uncomfortable Maddie is and Kendall’s mom says Kendall will do it.

Maddie is weirded out by kissing Gino because she knows that Gino likes her. She goes through with the routine in practice and she she gets to the kiss she finally does it but immediately runs out of the room. She says kissing him is not what she envisioned for her first kiss. Back at the Candy Apples studio John is working with the team on his choreography. Cathy is worried about how Abby plots with the judges and she really harps on the dancers to get the dance right. She says nick picking is what’s gonna give them the win.

At Abby’s studio the mothers talk with Gino’s dad about Gino joining the team permanently. Some of the mom are all for it but the other mother’s like Christy feel like it’s crap. They feel like Gino’s dad, Mickey, is also getting preferential treatment from Abby because she likes him. Mickey and Abby kiss to show the kids how it’s done and the moms laugh. Meanwhile the group continues to work on their broken dolls routine and Sarah continues to have trouble. Abby picks on her and tells her to fix the issues. Mickey goes back upstairs to the mom and continues to lobby for Mickey to join the dance studio. Christy isn’t feeling it and says he and his son needs to go back where they came from.

The Select team heads to Cleveland and they meet up with the Candy Apples on their home turf. Cathy sees that Abby has Gino and doesn’t feel any way about it because she says it’s her sloppy seconds. The teams warm up in the back and Abby tells the moms that John is with Cathy’s team when she sees the program. Abby meets up with John and says hello and walks away. Abby is livid that he’s working with Cathy and says he better not cross her path again. She heads back to work with Maddie and Gino. The mothers feel that now Abby is panicked and is having a mini breakdown inside because she’s so mad. The competition begins and the Candy Apples duo goes out on the stage. Abby knows that John choreographs great routines and is nervous to see their performance. Allyssa and Evan perform and the crowd goes wild and Cathy and John are happy with the performance. Maddie’s mother is nervous because she thought their performance was amazing and she’s worried that the kiss will make Maddie and Gino nervous.

Maddie and Gina head to the stage and their routine begins. Their routine is more upbeat and they end it with the surprise kiss which the audience loved. Abby was happy with Maddie’s performance but not with Gino’s performance. She tells the mothers and Gino’s dad that she thought Gino choked on stage. Mickey says he doesn’t agree and Abby says his opinion doesn’t matter. She goes to the back to give her Select team a pep talk before they hit the stage. Cathy also gives her Candy Apples a pep talk as well and says she really wants a perfect score for a clean sweep of the competition. The Candy Apples hit the stage first and dance to a perfect routine. The Select team hits the stage after and the moms are nervous because the Candy Apple’s routine was really good.

The Select team begins their Broken Dolls routine and has a great start. In a surprising twist toward the end one of the girls falls. Her mother goes backstage to console her and told her it was an accident and nothing to be upset about. It’s time for the results and Abby hopes her girls win but hopes that if they don’t they’ve learned how to handle it. Maddie’s and Gino’s duet gets second place and the Candy Apples place 1st which makes Cathy ecstatic. In the group competition the Candy Apples places second while the Select team ends up back on top as 1st place. Cathy is disappointed that her group lost to the Select team because she thought the number was stupid. Abby says she is relieved and the mothers ask her whats she’s gonna do now since she finally has her win. Abby points out Gino and tells him that she has decided to send Gino and Mickey home. The mothers go into the hallway to talk about it and Cathy comes up to ask whats going on but the mothers stay mum. Cathy walks away with no information and calls Christy a $50 cow.