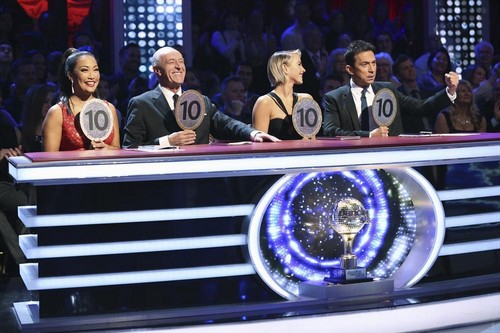 Tonight on ABC Dancing With The Stars 2014 continues with an all new Tuesday November 25, season 19 week 11 called “Road to the Finals,” and we have your recap below. On tonight’s episode, a look at the three finalists and their journeys throughout the season. Also: never-before-seen moments; and insight from the judges.

On last night’s episode, the four remaining couples competed in two exciting rounds of dance. In the first round, each couple took on the “Judges Pick” and performed a dance they previously performed this season that the judges had selected. In the second round, the couples took on the biggest competitive dance of the season, a Freestyle routine featuring special effects, additional dancers and unexpected surprises.  If you missed the episode, we have a full and detailed recap right here.

On tonight’s episode, Grand Finale Night will kick off with Dancing with the Stars: Road to the Finals, a one-hour special chronicling the journey of the three remaining couples, revealing never-before-seen moments, director’s cut-style commentary on their past dances and expert opinions from the judges on what to expect in the two-hour grand finale. It showcases the 11-week long journey of the finalists and some behind the scene moments.

We start the night off with learning a little more about Alfonso Robeiro, he was in a Pepsi commercial with Michael Jackson and credits that to his making it in the industry. Next, Alfonso’s tells us that his favorite dance this season was the Paso Doble from week 9, he found it was cool to dance with two girls. Alfonso says that his pivotal moment on the show was when he danced the Carlton, he gave it his all. The judges all comment on how Alfonso always took care of his partner Witney and are happy that he has done so well considering the injuries that he has sustained this season. Viewers have questions; what is the funniest thing Alfonso has every said? Witney says it is when they are in a move and moves her to a different spot. What did they both learn from each other this season because there was such a huge age gap? Witney says she learned from him. Alfonso says he remembered the fun along the way and that is what Witney gave him.

Janel Parrish was born in Hawaii and a ham her whole life says her parents. She left her life that she knew to move to California to become an actress. Janel’s turning point was in week 5 when she did the burlesque routine. Janel’s partner Val st he walked out on her during rehearsal he walked out on her and since then, things have just gotten better. Janel’s favorite performance this season was in week 5 when she did contemporary. The judges feel that Janel has evolved into a very mature well rounded performer, you feel so confident with her, you feel she is not going to go wrong. Julianne thinks Janel is one of the sexiest dancers they have ever had on the show. Bruno thinks Janel can win the whole thing.  Viewers have questions; weird thing about Janel she oddly long toes. Are Janel and Val dating? No, the two joke that it is just an odd arranged marriage.

Sadie Robertson used to play junior baseball when she was younger and even traveled to Austria to play. Her family is so proud of her and her father cried the first time he got to see her dance. Sadie’s favorite routine was the Paso Doble in week 7; she found it was crazy and fun but overall, it wasn’t a dance that was a judge’s favorite. Sadie says the worst time on stage was when she looked over at Len and lost herself – surprisingly she got all 10’s from the judges and couldn’t believe it – this was her major turning point.The judges feel that it is no surprise she got into the final, there is a vulnerability in her and the fans love it. Carrie Ann loves that Mark and Sadie believe in each other. Len says that it has never been in doubt that Sadie can dance. Viewers questions; did Mark learn anything from Sadie, to watch his mouth. What made Sadie want to go on Dancing with the Stars? Sadie wanted to do it because her grandmother loves the show.

Some final thoughts from our pros, tonight the finalist have to prove they want to be on the show. Alfonso is a professional, a great technician but his posture is his biggest weakness. When it comes to that last dance though, he is going to leave it all on the dance floor. Janel’s best quality is her leg, her leg lines are amazing. Her technique is stronger than any of the finalists. When Janel and Val dance, they have a connection and chemistry and connection can win you the competition. Sadie takes her long limbs and makes them work for her, her extension are fabulous. Sadie has become a ballroom dancer and that is what people are looking for. To get a Mirror Ball trophy you have to do everything perfect. Three will battle tonight, but only one will win. This is a finale you will not want to miss!