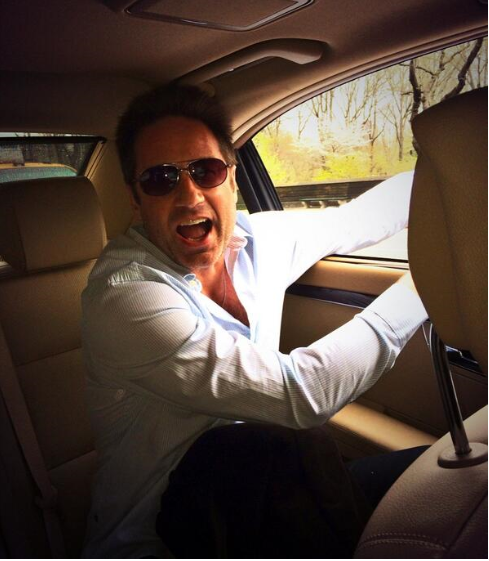 David Duchovny and Gillian Anderson have been intertwined for over two decades now thanks to a nifty little show called The X Files that made them both into household names. Nearly 15 years after leaving television the show still has a huge cult classic following and its fans have always wanted to see David and Gillian together in real life. They both married and divorced other people and are raising kids as single parents. They also make no apologies for their obviously close relationship and they seem to really love that we all speculate on just how cozy they really are.

Last night David showed up on Jimmy Fallon’s Tonight Show to talk about his final season of Californication and he also admitted to being on the wrong coast earlier in the day. David forgot that the show was now based in NYC and left his home there to trek out to L.A. For nothing. While telling the story of zooming back to NYC he also mentioned tweeting with Gillian through the ordeal. She had posted a few interesting and now deleted tweets trying to help him get his bearings. She also referred to David as “babe” in one of them and it caused fans to go crazy with speculation. Most women don’t refer to friends as “babe”, that’s a bit more personal and there is usually more to it than just friendship, right?

So the question is whether or not the rumors are true. Do you believe that more often than not David and Gillian have been shacked up together in NYC? Or do you think that they are just being manipulative and dropping nuggets to keep the fans entertained and wondering? Tell us your thoughts in the comments below!