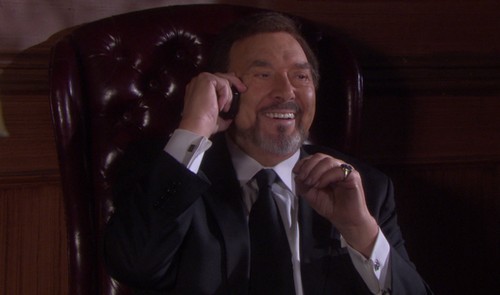 Days of Our Lives spoilers revealed weeks ago that Chad DiMera would be returning to Salem, and the part would be played by soap opera newcomer Billy Flynn. According to recent DOOL spoilers, Flynn will make his highly anticipated debut on the NBC soap opera on Friday, September 12th. EJ DiMera’s younger brother was introduced to Days of Our Lives fans in 2009 and the part was played by Casey Jon Diedrick until 2013 when the character exited the canvas after he was shot.

So, where has Chad DiMera been the past year? Well, according to Days of Our Lives spoilers, Billy Flynn revealed in a recent interview with The Wrap that he’s been bonding with his father, Stefano. According to Flynn, Stefano has been “grooming Chad” while they were away, and not only will Chad DiMera be physically unrecognizable when he returns to Salem, he will not be the same young character we remember.

Billy Flynn dished on what fans can expect form the new and Chad DiMera. According to the Days of Our Lives spoilers in Flynn’s interview with The Wrap, “Chad comes back, he decks a very prominent family member in the face to let him know that he means business. We kind of find out where Chad’s loyalties lie through the first two weeks of the journey, which are pretty much to himself now.

“The way I look at it, much like Stefano, everything’s kind of a chess game. With Chad coming back, everything is a chess game, and everyone in Salem is a pawn. He’s going to use anybody he absolutely can. He’s come back in the picture and he’s ready to assert his place as a prominent member of the DiMera family.”

It sounds like Chad DiMera’s Salem return will be an eventful one for sure. Are you excited to have Chad back on Days? Do you think he will be able to fill the void of his older brother, EJ DiMera, when James Scott exits the NBC soap opera? Will Chad and Stefano work together to regain control of DiMera Enterprises from Sami and Kate? Let us know what you think in the comments below and don’t forget to check CDL tomorrow for more DOOL spoilers.