Days Of Our Lives Spoilers: Will Eric Return To The Clergy or Hook-Up With Nicole After Steamy Encounter? 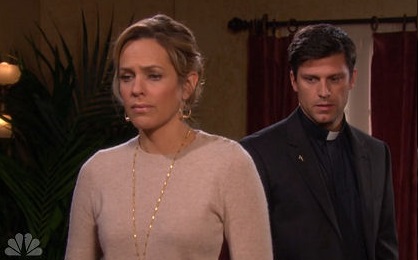 Are there any happy couples left in Salem? With all of the drama on Days of Our Lives, it seems like forever ago that Eric kicked Nicole to the curb for hiding evidence from Dr. Chyka that could have cleared his name and proven that Kristen DiMera raped him. Eric lost the one thing that truly mattered to him, being a priest, because of Nicole. So naturally, when he learned that she had been hiding evidence that would have cleared his name and allowed him to remain a priest, he dumped her and went straight to the Bishop to try and return to the church.

After all of Nicole’s lying and scheming, DOOL fans cheered Eric on as he dumped her. But, Nicole just won’t take “no” for an answer and give up on the idea of reuniting with Eric. Days of Our Lives spoilers tease that Nicole might finally wear Eric down, and the ex-lovers will share a close moment during the month of July.

So, while the Bishop is considering whether or not he will let Eric return to the church, Eric is considering turning his back on the church so he can have sex with Nicole again. And, let’s not forget, Kristen DiMera is returning to Salem soon, and she’s the one who drugged and raped Eric to begin with, her return will likely create even more drama for Eric.

It looks like Eric is going to have some tough decisions to make this month on Days of Our Lives. Do you think that Eric should continue his quest to return to the church? What about Nicole, does she deserve his forgiveness, if he is returning to the church then that means he has to forgive everyone, right? Do you think that Eric will end up having sex with Nicole again? Let us know what you think in the comments below and don’t forget to check CDL tomorrow for more Days of Our Lives spoilers.