Days of Our Lives Spoilers: Will Theresa Kill John Before He Reveals Brady Is Innocent, Now That He’s Awake and Speaking? 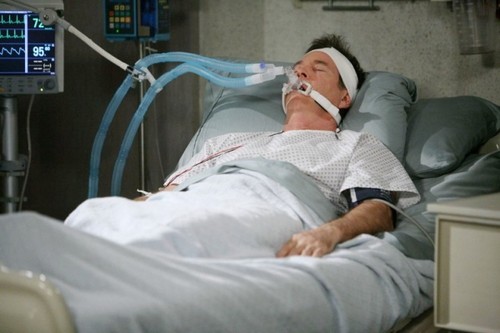 Days of Our Lives spoilers recently revealed that John Black would wake up from his coma on the NBC soap opera, and he did just that on Wednesay September 24th. Marlena, Brady, and the rest of John Black’s family are obviously thrilled by his rapid recovery, but one Salem resident in particular is freaking out. Theresa Donovan had an altercation with John over her intentions with Brady, and in a fit of rage and desperation she hit John over the head with a fire poker and placed him in a coma. When the police demanded to know what happened to John, Theresa pegged the crime on her hubby Brady, and said that John attacked Brady and Brady hit him over the head in self-defense. Since Brady was passed out drunk during the incident, he had no idea what truly happened, and believed Theresa’s account that he struck his own father.

Since Days of Our Lives spoilers revealed that John has officially woken up, there is no news yet on whether he remembers what happened the night that Theresa attacked him. Although, his memory does appear to be good, since he recognized Brady and Marlena. Daniel and Kristen DiMera suspected before John Black even woke up that Theresa was the person really responsible for his coma and not Brady, but other than their unconfirmed suspicions the only person who truly knows what Theresa did is John Black himself (that is, if he remembers).

According to Days of Our Lives spoilers, Theresa may try to take matters into her own hands and make sure that John Black never gets a chance to tell the police that she is the person who hit him with the fire-poker, not Brady. DOOL spoilers reveal that Theresa headed to the Salem Hospital when she learned that John was awake, with a mysterious syringe in tow. Could she plan to inject him with some sort of poison or medicine that will ensure he doesn’t rat her out?

Theresa was crazy enough to nearly kill John once, so she just might be crazy enough to try and kill him again to protect her secret. What do you think, DOOL fans? Did John finally wake up just to be killed off by Theresa? Or is he about to expose her secret and tell everyone that she not only put him in a coma, but framed her own husband for the crime? Let us know what you think in the comments below, and don’t forget to check CDL tomorrow for more Days of Our Lives spoilers.