Days Of Our Lives Spoilers: Will Sami Tell Chad DiMera of Abby Cheating With EJ and Ruin Abigail’s Life? 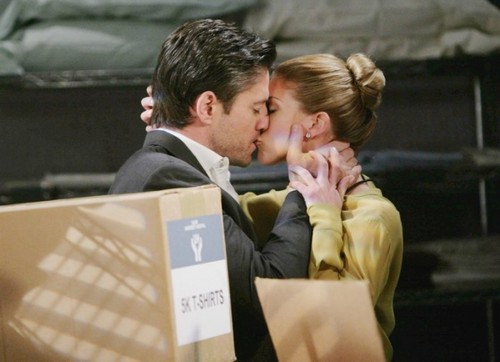 Days of Our Lives fans recently learned that Sami Brady is still a force to be reckoned with, and she is very aware that her hubby EJ had an affair with Abigail Deveraux, and marrying him was all a part of a revenge scheme she cooked up with her frenemy Kate. Sami is determined to make EJ pay for his affair with Abigail, but let’s not forget EJ isn’t the only person who wronged Sami. Abigail was just as responsible for their tryst as EJ was, and anyone who knows Sami Brady, knows that she most likely has something in store for Abigail as well.

According to spoilers in the July 21st edition of Soaps In Depth, during the week of July 7th Abigail will begin to feel the wrath of Sami. And, forcing her to be a maid of honor in her wedding to EJ was just the beginning. The magazine states, “It’s all building up to a major shock for Abigail. Because it turns out that as bad as things have been lately, her worst nightmare is only starting to unfold.”

So, what could Sami have up her sleeve for Abigail? Rumors have been running rampant for weeks now that Chad DiMera is heading back to Salem. DOOL spoilers were leaked claiming that Billy Flynn might have been cast in the role. Perhaps Sami’s revenge plan involves bringing Chad DiMera back to Salem and revealing to him that his ex-girlfriend and brother betrayed him and slept with each other. Another popular theory is that someone tampered with Abigail’s pregnancy test, and she really is pregnant with EJ’s baby. If that is the case, perhaps Sami is the one that tampered with the results, and she is going to surprise Abigail and tell her that she really is pregnant.

What do you think Days of Our Lives fans? What kind of revenge does Sami have planned for Abigail Deveraux? Do you think she’ll call Chad DiMera back to Salem and let him know what his ex and brother have been up to? Share your thoughts and theories in the comments section below and don’t forget to check CDL for more Days of Our Lives spoilers tomorrow.

The Soap Opera Spy fans seem to think that Sami is a force to be reckoned with but not everyone is on her side:

I feel sorry for whoever gets in Sami’s way! I would want to tangle with her, lol.

EJ & Abigail deserve whatever Sami has in store for them! Are you kidding?!

I AM an EJ fan and I hope he takes the self righteous hypocrite Sami Brady DOWN – Go Team DiMera!

Sami is a hypocrite. She’s reaping what she’s sowed all these years. I hope EJ & Stefano come back with a vengeance on her. And I’m not an EJ fan!

Abigail is young, she made a mistake. I hope that her whole life is not ruined.

Soon enough we will learn the outcome of Sami’s revenge plot!