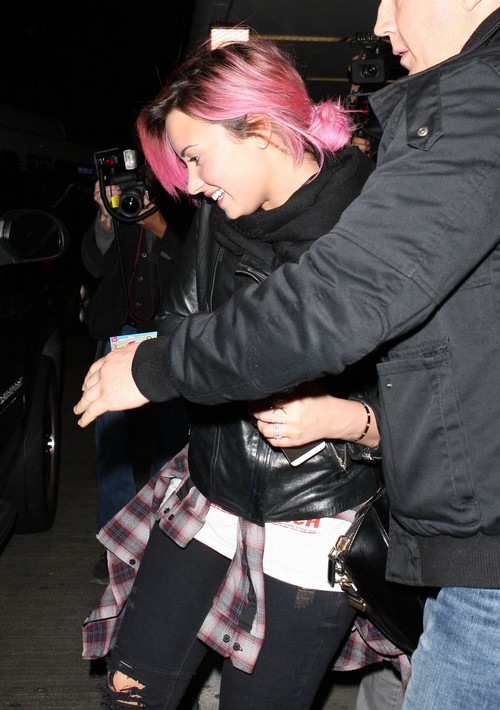 Are Demi Lovato and Wilmer Valderrama engaged? They just might be! While Demi was in Austin, TX with Wilmer, she posted a photo of herself holding a coffee cup — and the photo revealed a ring on her left hand! She posted the pic on January 29th and, alongside the snapshot, insinuated that she’s happier than ever. What do you all think? Do you think Wilmer and Demi make a good pair? Or perhaps the better question is this . . . . Does Wilmer V seem like the kind of guy that would ever be ready to settle down? He’s become known for being a Hollywood player, so it’d certainly be interesting to hear that Demi and Wilmer are indeed in talks to settle down with one another.

Wilmer was reportedly spotted purchasing a ring at a jewelry store prior to the Thanksgiving holiday, so many people believe that his purchase was in fact an engagement ring — the one she’s wearing in the above picture. Another bit of news that seems to be making this gossip feel more and more true is the fact that Wilmer appears to be quite dedicated to Demi, and he’s also willing to change his ways for her. A recent report in OK! magazine revealed that Demi gave her boypal an ultimatum: Either he puts an end to his partying ways or she’ll put a stop to their relationship.

Whether that’s true or not, whether Demi really did present Wilmer with that choice, we can’t be sure. But we do know that Demi doesn’t need any negative energy in her life, especially after she’s thwarted several of her own demons, so if they are really engaged (the jury’s still out!) let’s hope Wilmer has matured and proves to be a loving, positive force in the singer/actress’s life.

What do you think about Demi’s new ring? If it was an engagement ring, do you think she would’ve been more conscientious about hiding it in a picture, especially if she didn’t want word to get out? Leave your thoughts and opinions in the comments section below! We want to hear from you!

Demi Lovato lands on a flight at LAX Airport on January 30, 2014 in Los Angeles, California. Rumors are swirling that the “Neon Lights” singer has gotten engaged to her on again/off again boyfriend, actor Wilder Valderrama, as she was spotted wearing a ring on her finger. Their recent tweets to each other add fuel to those rumors, with Demi saying, “to the funniest, most inspiring, incredible man I know.. @WValderrama – thank you for helping me get through my darkest moments.. You truly are a light to this world and to my life.. Happy Birthday!!!” Wilder response was equally lovey, “who needs presents when the gift of you is real to us all.. Thank you for the blessing of knowing you.”