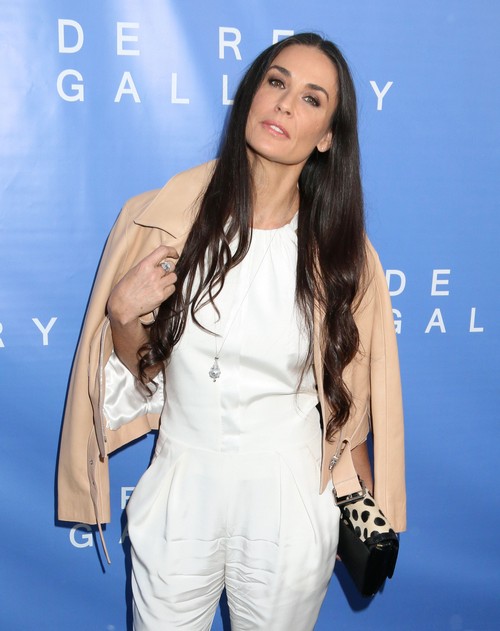 Demi Moore is probably still recovering from the shock of Ashton Kutcher ditching her for Mila Kunis, but I don’t think that compared to the betrayal and hurt she felt when she found out that Mila was pregnant. Remember, she and Ashton were married for a long time, yet he never deigned to have kids with her despite her attempts at convincing him otherwise. And now, just a year into dating Mila, Ashton is both engaged and about to be a father.

New reports allege that Ashton called Demi as soon as he found out that Mila was pregnant, with sources explaining, “It’s just Ashton’s style to inform Demi before the news broke. He was fully aware of how much Mila’s news would affect Demi and wanted to be the one to tell her personally.”

Apparently, Ashton is still in ‘denial‘ about how much he hurt Demi, and he’s delusional enough that he thinks he can still be friends with her and her family. Um, dude – you dumped her! Seriously, has Ashton never broken up with someone before? He’s acting like someone who has no idea how to act around an ex, especially one whose heart he broke. Sure, he claims he wants a cordial relationship with Demi, but calling her to tell her about Mila’s pregnancy won’t help with that – and in fact, it probably did the exact opposite.

Sources tell us that Demi cursed him out when he told her, and now she’s spiraling back into her depression phase. One can only hope that she realizes that Ashton, of all people, is not worth jeopardizing her health for. However, that’s a lot easier said than done, especially with Demi’s fragile mental health. Earlier sources had claimed that she had gone through a bout of severe mental anxiety after her divorce from Ashton Kutcher and allegedly even attempted suicide, and a repeat of that would be extremely difficult on her family and friends.

Demi Moore attended the grand opening of the De Re Gallery on May 15, 2014 in West Hollywood, California.