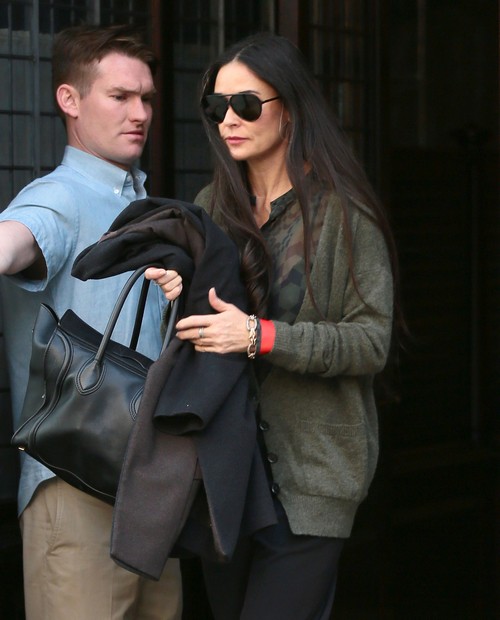 Demi Moore has reportedly reached out to ex-husband Ashton Kutcher and his fiancee Mila Kunis offering help babysit their newborn baby, Wyatt Isabelle Kutcher. Demi has no ill feelings towards the couple and is putting her past with Ashton Kutcher aside. Radar’s source says “Demi is putting the past behind her now. She is in total acceptance now. She ultimately has great love for Ashton and has accepted the fact that he is in love Mila and that they are starting a family.”

Kutcher and Mila Kunis welcomed their baby girl, Wyatt Isabelle, on Tuesday. The day after she was born Ashton played the guessing game on his website by putting up pictures of babies and letting fans guess which one is his saying, “Mila and I would like to welcome Wyatt Isabelle Kutcher to the world. May your life be filled with wonder, love, laughter, health, happiness, curiosity, and privacy. Can you guess which one is ours, or does it really matter? All babies are cute.”

The harsh breakup between Demi and Ashton was all over tabloids and the media followed Ashton Kutcher to his new relationship with Mila. Recently fans have been told there is no bad blood between the celebrities. Ya right, can you ever see Mila Kunis letting Demi Moore and her canister of nitrous oxide anywhere near her new baby? As if Ashton Kutcher and Mila are going to have Demi babysitting for their kid.

Prior to her relationship with Kutcher, Demi  was married to Bruce Willis for over a decade and has 3 daughters with him. Of course Demi also allegedly took drugs and partied with her daughters, not exactly the parental role model we all hope for.

No one knows if Ashton and Mila have or will take Demi up on her offer, but you have to admit, it will be kind of awkward.

Demi Moore steps out in New York City, New York on September 19, 2014. Demi is in town to support her youngest daughter Tallulah who just left rehab after spending six weeks at the facility where she battled body dysmorphic disorder and substance abuse. Image Credit: FameFlynet