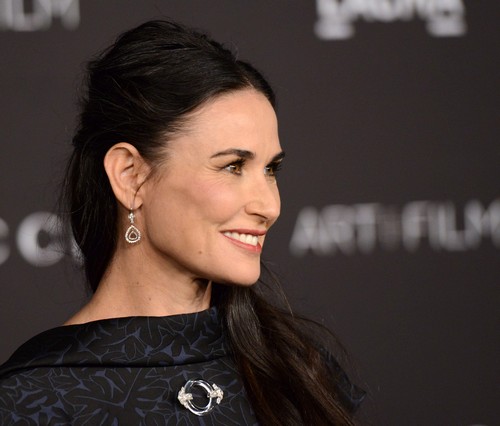 Ashton Kutcher’s old flame Demi Moore might just go down in history as the craziest ex-girlfriend…ever. Mila Kunis is reportedly not happy with Demi hovering over her and Ashton while they are trying to raise their 2 month old daughter Wyatt Isabelle. And, apparently Ashton is encouraging the bizarre relationship between his ex, and inviting him to events to meet his new daughter! As far as Mila is concerned, three is a crowd, and she didn’t realize that when she started a family with Ashton, it would be with his ex Demi as well.

According to the latest edition of OK! Magazine, “Demi has been calling and emailing Ashton, asking for updates and to visit the baby. She doesn’t see anything wrong with being involved, but Mila is uncomfortable.” OK! goes on to reveal that Ashton is completely on board with his ex Demi being a part of baby Wyatt’s life, and he even invited her to his daughter’s Kaballah blessing on October 8th. Demi arrived with her daughters Rumor and Tallulah, and even brought a gift for the baby!

Demi Moore has had a reputation as a stage five clinger in the past – but this is an entirely new level of insane. Who ever would have thought that Mila Kunis would be co-parenting with Ashton Kutcher AND Demi Moore? How does Ashton think this is normal? He and Demi have no children together and they were never married, they have no reason to even still be in contact, let alone meeting each other’s children from their new relationships. Do you think this is as nuts as we do? Sound off in the comments below!