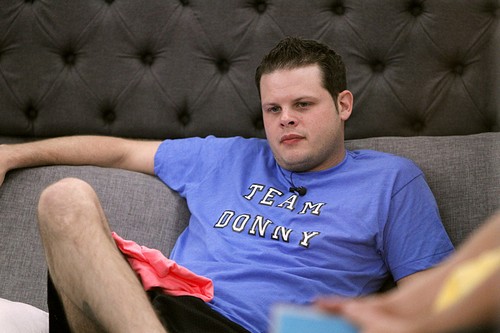 Most everyone that has watched Big Brother 16 spoilers has noticed the brilliant game that Derrick Levasseur has played from start to finish. He has been the puppet master, the ring leader and the captain of the ship of Big Brother 16 from pretty much day one. What makes the moves all the more impressive is that he has done so from a background position for much of the game. Many people that were directly evicted due to Derrick’s strategy (pretty much everyone), never knew it was Derrick until it was too late. Some still don’t fully know that he was the mastermind behind it all.

That is a problem.

Big Brother 16 spoilers imply that the jury not being fully aware means that Derrick will have to try to explain it to the other houseguests. Because it was so complicated and multi-faceted, that is a tall order indeed. In fact, trying to explain the intricacies of such strategy may be lost on some houseguests… even in retrospect.

It will take a truly humbled jury to hand the money to Derrick in the Big Brother 16 finale. Will Frankie, for example, be willing to admit that Derrick played him like a fiddle? Frankie is extremely arrogant from what we have seen in the spoilers and live feed, so I doubt it. Each of the houseguests are going to have trouble overcoming emotions, but Derrick is going to be in a very tough situation. His strategy work is beyond most of the jury members.

It seems a shame that one of the best Big Brother players in history might actually be doomed to be under-appreciated by those that spent time in the house with him. I am not fully sure that all the jury members will fully appreciate what he has done. He is about to make the Big Brother finale (hopefully) without ever having been put on the block in any way. Think about that as a Big Brother fan and let it set in…

Derrick is headed for the Big Brother 16 final four and it looks like nothing can stop him from the finale. Once he gets there, it will be interesting to see how he plays it. I would imagine he has some brilliant plan to show what he did, but I fear it might come across as arrogant. His careful game play is a tough thing to describe without pointing out how he manipulated people’s own weaknesses to get what he wanted. It was so effective that it was downright embarrassing for the other houseguests. Even Frankie, a wily player in his own right, was snowed by Derrick for most of the game.

Whatever happens, Derrick is one of the all time great strategists to play the game. Future players in the Big Brother house would be wise to follow his lead.