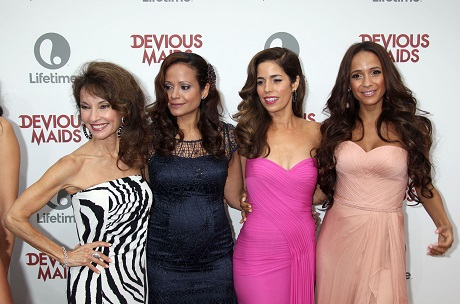 In a recent interview, she revealed, “[Erica and Genevieve] both love men and they both have been much married and much divorced. They both love beautiful clothes and both love their children.” However, she also added that Genevieve is also ruled by her heart much more than Erica ever was, and her lack of street smarts make it difficult for her to be as conniving as Erica was on All My Children.

Barring the similarities and differences between her two most popular characters, Susan also adds that working on Devious Maids is a dream come true. She expresses her love and admiration for the show’s creator, Marc Cherry, who also created and wrote Desperate Housewives.

She dishes on the upcoming few episodes of the second season, which has already featured plenty of twists and turns. She says to, “expect some hilarious scenes and some big surprises.”

So much for spoilers, huh? I guess Susan is well versed in teasing plot twists without actually giving anything away, since she’s had so many years of practice playing Erica on All My Children. Some of the stories on that show were absolutely insane, and Susan Lucci had to make sure that people didn’t know about any of it until it aired. I’m sure the ship on Devious Maids is just as tight, especially with the show’s rising viewership and its ardent fan base.

Are you guys fans of Susan Lucci, and do you watch Devious Maids? Let us know your thoughts in the comments below.