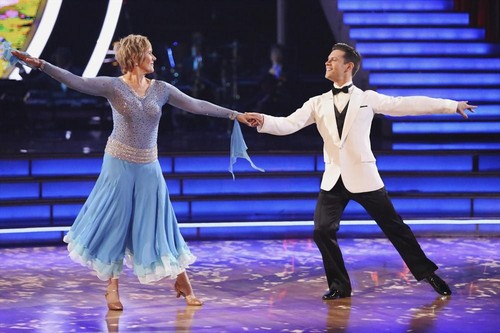 Long Distance Swimmer  Diana Nyad danced a Cha Cha Cha, on tonight’s season 18 episode 2 of Dancing with the Stars. The show kicks off with a show-stopping opening number choreographed by Mandy Moore featuring the entire cast followed by an announcement that is not to be missed!   We posted a nifty bio of Diana so you can get more familiar with her. If you missed tonight’s show you can read a full and detailed recap, right here.

On last episode Diana performed a Foxtrot and Carrie Ann had this to say about her peformance,  “You are like a slowly opening flower.  I enjoyed watching you.  That technique is going to take you far.”

Diana Nyad and professional dancer Henry Byalikov: dancing a Foxtrot.  Diana has been getting ready for his dance tonight.  She tweeted, “Henry is so elegant on the floor. He’s keenly intelligent & extremely articulate as well. Patient too!!”