Diddy and Drake Fight: Brawl Over Music Rights and Drake Gets Beat Up, Goes to Hospital! 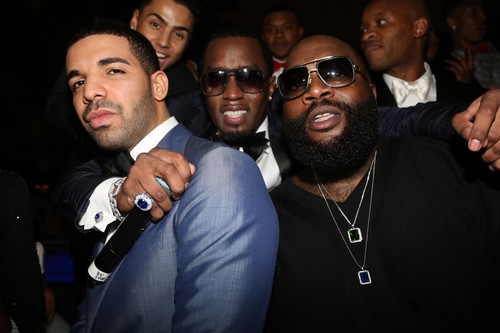 Word to Drake, you may not want to mess with Diddy because he will come out swinging in an epic brawl, and knock you out! Apparently instead of launching a lawsuit against the Toronto based rapper, Diddy decided to launch some fists in Drake’s general direction. Drake is getting it from all ends, isn’t he? First he was accused of banging Chris Brown’s ex-girlfriend Karrueche Tran and now he’s got Diddy in his face, pounding the crap out of him in an epic fight. Drake got beat up by Diddy outside of the LIV Nightclub in Miami, Florida early Monday.

According to Radar, Diddy sent Drake to the hospital with a shoulder injury after they duked it out over rights to some song samples. A spy on the scene said that “they were arguing over the rights to a song, and got into a physical fight. Diddy claimed that Drake was using music without the proper rights.”

Another spy on the scene said that Diddy and Drake looked like they wanted to fight the moment they saw each other. The source said, “Diddy left LIV on his own and made a beeline towards the car, like he was a man on a mission. Drake got out of his SUV, and there was a scuffle before it seemed that Drake had hurt himself, he was holding his shoulder like it was dislocated; he was in obvious pain. Diddy was heard shorting something to the effect of, ‘Handle your business!'”

It sounded like Diddy was on a mission to leave, but stepped up to the plate when Drake tried to act a fool. Drake felt that his presence would cause a brawl and he was right. A DJ named Sam Sneaker was there and said on Twitter, “Diddy put hands on that boy…And he ain’t go 0-100. That boy left.”

Perhaps he shouldn’t use music he has no rights to use – but on the other hand, why couldn’t Diddy just take him to court?