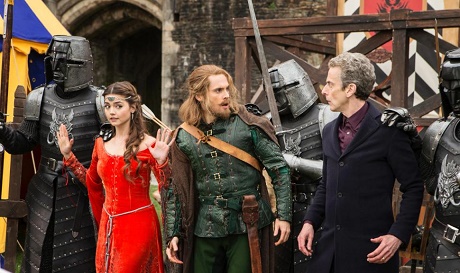 After last weeks episode of darkness, the Doctor decides he is up for some fun and asks Clara, in all of time and space, where would she like to go. Clara hesitantly informs him she would love to meet the one and only Robin Hood. Apparently, she had a thing for him and his stories when she was younger. The Doctor insists that he isn’t a real person – just a made up bunch of nonsense. However, needing a bit of mindless fun after his last adventure, the Doctor takes her where she wants to go. No sooner has the TARDIS landed than out pops Robin Hood, who nails Clara with a arrow and the proceeds to fight the Doctor with his sword.

The Doctor’s weapon of choice is a spoon. Naturally, the Doctor is convinced that Robin Hood is a fake and a robot (more on the robot bit later). Clara who is so giddy with childhood abandon doesn’t mind the arrow to the arm; in fact, I’m betting it’s going to be her souvenir. After some more negative remarks on the Doctor’s part and complete exasperation on Robin’s, he and Clara, who is now dressed to the nines in mid-evil garb, go to meet his band of Merry Men. The Doctor tags along only because he is hell bent on proving they aren’t real by snagging some of their DNA.

The Doctor happens to notice that, in the middle of November, the temp is 75 and sunny in England. Perfect weather for a not so perfect place. Oh, but wait, y’all, this tale gets so much better. You see, Robin Hood gets invited to participate in a archery contest held by the one and only Sheriff of Nottingham, the prize being a golden arrow.

Imagine how sweet shooting apples off of people’s heads will look with that. It’s a pretty entertaining little scene which involves the Doctor showing Robin Hood up. By showing up, I mean, cheating. By cheating, I mean, blowing things up. You guys remember the robot thing I promised to come back to later? Well, it’s later, and the Sheriff has an army of freaking robots. We find this out courtesy of Robin cutting one of the arms off. Whatever shall our hero, a cynical doctor, and our hero’s number one fan girl do?

Get caught and thrown in the dungeon that’s what. Or, as the Doctor so eloquently puts it, “Quickest way to find out anybody’s plans…..get captured.” Even in the dungeon, the Doctor’s ummmmm…. How shall I say…arrow envy (?) continues. Never mind they are keeping company with robots that shoot freaking lasers out of their eyes. I mean, who’s got time for that? Clearly not the Doctor.

Robin is quite charming in his new digs; then again, he is probably used to being in the dungeons. Back and forth it goes on and on and on with these two. Clara, who finally reaches her limit, invites them both to zip it and lock it and help her come up with a plan. One of the Sheriff’s evil doers was listening at the door and decides Clara is in charge here. She is taken to see the Sheriff who tells her how he came to have robots in the middle of a freaking forest. It’s simple, really. They crashed there and they need his help in repairing the ship. In the meantime, the Sheriff is going to take over the world.

In the meantime, in between time, the Doctor and Robin Hood manage to escape. The Doctor, much to his shock, even if he shows very little, finds out that the castle is in fact the Promised Land. You know that pesky thing that crazy mech guy was after in the first episode of the season. Cray cray, right?

After the Doctor takes a minute, he realizes everyone around him is a robot, including the Sheriff. Speak of the devil, here he is with Clara. Robin takes her “hostage” and gets him and her off the train to crazy town. The Doctor, however, has other plans and hightails over to the Sheriff. The Sheriff has no problem confessing to being a robot and even less trouble admitting that he was stealing gold from everyone so that he could fix the ship. We also find out that the ship was leaking radiation which is why it’s so unusually warm in the middle of November.

The Doctor tries to explain to the Sheriff there isn’t,won’t, and never will be enough gold to fix the ship.

The Doctor quickly realizes that, when it comes to the Sheriff, talk is cheap unless you have gold teeth, so he leaves and somehow convinces the other prisoners in the dungeon – including a woman of mystery, who I’m sure is significant to this story – to help him.

It’s quite clever how they do away with the robots. They use shiny plates that shoot the laser beams back at the robots, which cause them to go poof. One last time, the Doctor comes face to face with the Sheriff. The Doctor asks if Robin Hood is also a robot. The Sheriff tells him no. It slowly begins to sink into the Doctor’s stubborn head that Robin Hood is in fact the real deal.

While the Doctor ponders, Robin Hood shows back up with Clara and begins a sword fight with the Sheriff. This scene is different from the original, which was to end in the Sheriffs head being cut off; it was changed due to the recent events involving journalist. Instead, Robin knocks him into a cauldron of melted gold.

They get off the ship just before it goes up up and away. Unfortunately, it didn’t have enough gold and there is a good chance it just might blow up. Robin shoots his golden arrow into it, giving it enough power to take off into space. It’s time for our Doctor and Clara to leave – but not before the Doctor and Robin have their first banter free conversation. It’s about being legends even when it is unplanned for you to do so. Robin suggests that maybe it’s because others are meant to be heroes in our names. With that, Clara, grinning from ear to ear, and the Doctor board the TARDIS.

Meanwhile, Robin is greeted by the mysterious woman from the dungeon, who turns out to be his happily ever after Marian.