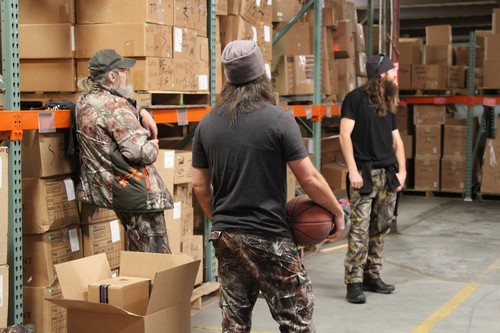 Tonight on A & E America’s most recognizable family is back for a funny, functional, and family-filled episode of DUCK DYNASTY called, “Hands on Woodchipper.”  On tonight’s show Willie sponsors a radio contest. Elsewhere, Lily goes miniature golfing with a boy from her school.

On the last episode with Reed’s graduation day approaching, Jase decided to take Reed frog hunting the night before like he did on the day of his own graduation. Willie and Si joined in, and Jase tried to keep them from imparting their “college advice” on Reed. Meanwhile, Korie, Jep, Jessica and Kay pulled a senior prank of their own by toilet papering Missy and Jase’s house. Did you watch the last episode? If you missed it we have a full and detailed recap, right here for you.

On tonight’s episode, When Willie agrees to sponsor Mountain Man’s radio contest, a “Hands on a Hardbody” competition he somehow finds himself competing against Si for Mountain Man’s last minute prize: a woodchipper. Meanwhile Jep and Jessica chaperone Lily’s first “date,” mini golfing with a boy from her school and Jep goes into over-protective dad mode.

We will be live blogging Duck Dynasty tonight at 10PM . . . so make sure to come back to this spot and watch the one hour show with us. Make sure to refresh often so you get the most current info! While you wait for the episode let us know how excited you are about the return of Duck Dynasty.

Jessica tells Jep about Lily’s first boyfriend. Concerned about his 11 year old daughter, who he thinks is dating about 20 years too early, he decides that he wants to come along with Lily on her mini golf date. On Lily’s date, the boy, JD, brings flowers for Lily but Jep is not amused. Jep develops a liking for JD but keeps his barriers up. When Jep learns that JD likes to hunt, he gives him his stamp of approval.

Mountain Man’s radio station contest is held in his backyard. But the surprises don’t stop there. Willie soon realizes that he was the only one to donate to Mountain Man’s competition and the three Robertson men are the only ones to make an appearance. With only Willie’s donation, Mountain Man downgrades the prize to a wood chipper. Lacking any other competitors, Willie and Si end up competing against one another for the wood chipper. Jase sees the competition as an opportunity to embarrass Willie as he and Si taunt Willie throughout the contest.

Willie gets fidgety as his lunch begins to creep up on him. Even with mother nature calling and Korie’s pleading, Willie refuses to give up. It wasn’t until Jase tossed a football at Willie that he takes his hand off the wood chipper to catch the ball. The result? Si becomes the victor and goes home with the wood chipper.